by Councillor John Barclay with help from Public Works staff.

In the past eight months, as the Council Liaison to Public Works, I’ve come to appreciate both the scale and scope of the work that a relatively small number of staff undertake on behalf of the residents of North Grenville. I’ve learned a great deal about what the Public Works department does, how it does it, and how it’s paid for. I’m still learning. I thought I’d share some of the cost saving measures the department has undertaken that have saved the Municipality hundreds of thousands of dollars.

First of all, as I mentioned, Public Works does a lot with a little; it continually looks to optimize its operations. For example, this winter a resident wrote me a humourous email questioning the route that the snowplow took after every snowfall. The route resulted in more snow piled on his side of the road – could it not be reversed (ie. his side plowed first and the opposite side plowed last), even once in a while? When it was explained that the route the plow takes is determined by minimizing the distance travelled, gas used, and eliminating switchbacks, he saw the logic and understood (right, Peter?). At first glance, Public Works operations may not make sense to you, but there’s always a method to the madness. It’s hard to put a number on the amount of savings that this particular practice has produced over the years, but here are three items that are easier to quantify in terms of savings:

These are just a few instances where Public Works has been able to do more with less. With one of the largest budgets of all the departments in the Municipality, being able to make wise investments, to continually optimize its operations, and to diligently find savings where it can, is essential. I hope to report some more in the future. 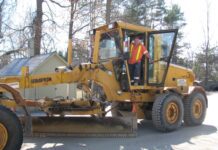