This June the area’s first ever Pride event will be coming to North Grenville. Holly Brown founded the Rainbow Union Dundas and Grenville a few years ago because she recognized a gap in support for the LGBTQ2 population in the rural area. She was travelling in and out of Ottawa to find community and support for her child and met other people from rural areas who were doing the same thing. “This is just getting silly,” she thought.

The Rainbow Union is a grass roots movement that has created a LGBTQ2 community in North Grenville and surrounding area by creating a safe space for youth, their families and adults to gather. LGBTQ2 is an acronym that stands for lesbian, gay, transgender, queer (or questioning) and Two-Spirit. It includes anyone who doesn’t fall into the heterosexual category.

The group meets once a month at the Kemptville Youth Centre to enjoy tea and cookies and socialize with people who understand the realities of being LGBTQ2 and living in the country.

Holly says rural areas often get a bad rap for being bigoted and unaccepting, but, in her experience, this is not the case. “The more we come forward, the healthier the community will be as a whole,” she says.

Last year, the municipality recognized June as Pride Month by raising the Pride flag at the Municipal Centre. This year, Holly thought it would be nice to take it a step further and organize a whole day of events to celebrate pride in the community. “It has taken off and grown significantly,” she says.

On June 1, 2019, both the pride and trans flag will be raised at the Municipal Centre. Later in the day, there will be a small Pride Parade through downtown Kemptville, ending in a reception in Riverside Park with activities for kids and an area where local businesses can set up a booth to show their support. The Rainbow Union will also have a booth where people can learn more about the organization and what they are all about.

Holly is hoping that this will become a yearly event in the municipality. The Rainbow Union made a presentation to council on Tuesday to make the flag raising at the Municipal Centre a staple for every June 1. To spread the word, the Rainbow Union is also selling campaign-style lawn signs that people can purchase to show their support.

Holly says they have already received quite a bit of support from the business community for the Rainbow Union and the pride event. Rideau Roastery is currently donating $1 from every pound of coffee to the initiative. Starbucks in Kemptville also collected donations for the Rainbow Union at the beginning of December. Funds raised are being used to create a mobile library featuring books that include those about the LGBTQ2 community.

“Sometimes it’s really important to see yourself in the world around you,” Holly says. “We want to normalize it by putting it in our culture in all sorts of ways.” The mobile library is set to be launched at the pride event on June 1.

Anyone who is interested in supporting the Rainbow Union and North Grenville’s first pride event is encouraged to follow them on Facebook and Instagram under Kemptville Pride 2019. More details about the day, such as timing for all the events, will be broadcast over social media. 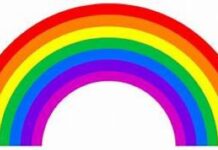 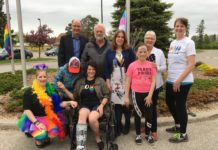