The Royal Canadian Legion kicked off its 2018 Poppy Campaign on Friday, October 26. This annual campaign raises funds for veterans and their families locally and promotes honour and remembrance of those who have made the ultimate sacrifice for their country. RCL Branch 212 Kemptville officially launched the campaign by presenting the first poppy to Mayor David Gordon at the branch on Friday.

New this year is the digital poppy, which can be found at www.mypoppy.ca. Canadians can donate online and they will received a digital poppy in remembrance of a veteran of their choosing. Regardless of how Canadians choose to show their respect and gratitude, we must never forget the sacrifices made so that we may enjoy our freedom.

Poppy boxes have been distributed to various businesses across Kemptville and volunteers will be canvassing at major retail outlets over the next two weekends accepting donations and distributing poppies. The campaign and remembrance period concludes with the traditional Remembrance Day ceremonies to be held at the cenotaph. 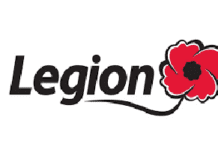