A brilliant man, initials W.S., once wrote :“…but man, proud man, drest in a little brief authority, most ignorant of what he’s most assured, plays…tricks before high heaven as make the angels weep.” To some, since it was written hundreds of years ago, such words are now devoid of meaning. And yet, those words are given meaning by “authority” at various levels of government on a quite regular basis. And sometimes relating to subjects concerning the welfare of considerable numbers of people.

Government authority must, of course be used to making decisions, hopefully well-informed and useful ones. In a theoretically democratic society, much valuable information for the nourishment of the decision-making process should necessarily be taken from the people who must live with the decisions made by government. Even so, when optimistically asked by the editor of this newspaper last autumn about the role of local residents in determining the finality of the decision to impose a jail on the town of Kemptville, a town with an urban footprint scarcely exceeding 4000, our very influential MPP who holds a ministerial portfolio responded that the provincial ‘authority’ had the sole discretion to decide in that matter. Hmmm. So much for the people whose voice had been so important in the recent election.

As matters stand, winter has now passed since last summer’s decree from on high. And, so hope the holders of “authority”, the putative dull-witted populace has slept the problem off and now has only the scarcest memory of it. Methinks they may err in that judgement. Owing to the steady work of the two local jail opposition groups (JOG and CAPP) which are active, pressure has been brought to bear on the municipal council and the province. While the ‘authorities’ gleefully hide in Covid land, it is still possible for concerned residents to attempt to register their views. In fact, a ZOOM meeting on the subject of the jail is being scheduled by the municipality. So, what questions might be asked at that meeting? Last autumn, unlike Facebook from which I have been banned since November for posting anti-jail articles, the Times was kind enough to publish several of my articles on this subject, written since August 29. Some of the questions I brought forward in that series follow for your information:

Finally- Is “Raw Political Power” the only important criterion in the decision-making process of our Conservative provincial government? Do the people of Kemptville intend to allow that to be the case? Or are the people still awake to this issue ? 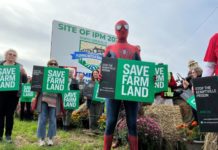