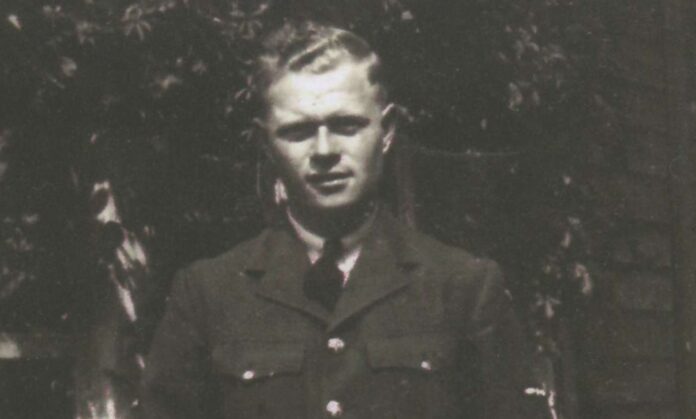 William Lysle Buchanan, fondly remembered by all that knew him as “Billie”, was born on December 6, 1919.  He grew up on the family farm in the Kemptville area and attended both the SS #10 Mills School and Kemptville High School. Billie was well known for his sense of humour. A prime example of that was the fact that he had a pet skunk. He could be seen walking his skunk along the sidewalk on a leash or had it simply perched upon his shoulder.  That was the ultimate of Scottish humour.  It was rumored that the skunk died of a broken heart when Billie joined the Air Force.

In December 1940, one year after his graduation from the Kemptville Agricultural School, Billie enlisted with the Royal Canadian Air Force.  He trained at Picton, St. Thomas,  Malton and finally Brantford, where he earned his “wings.”  Three weeks later, he was assigned to 418 Squadron and sent overseas, where he joined a Bomber Unit attached to the Royal Air Force.

Billie’s overseas duty was hectic.  On August 19, 1942, his plane was shot down and forced into the sea during a Dieppe Raid bombing mission. The plane broke in two, leaving Billie wounded and trapped inside. He was rescued by a Sergeant Clarence G. Scott of Tisdale, Saskatchewan, who was also wounded during the crash. Sergeant Scott later received the Distinguished Flying Medal for this courageous act by His Majesty, the King, with Billie present as an invited guest to view the Investiture.

After several weeks in hospital, Billie was fit for duty and went on to participate in a number of aerial missions and sweeps over occupied territory.  On a further mission to France during the night time hours of November 8, 1942, his plane went missing over enemy territory and he was presumed dead on November 11, 1942. Billie Buchanan is Remembered with Honour at the Poix-De-Picardie Churchyard, Somme, France and is commemorated on the former Bradwell Bay Royal Air Force Station Memorial in England; a bronze plaque and memorial tree placed along Veterans Way at the Ferguson Forest Centre; and the south shaft of the Kemptville Cenotaph located in front of the High School he attended.