Daniel Edson Pelton, born November 9, 1868, and Charles Cook Pelton, born July 12, 1876, found success in business by embracing the new technologies of the time. They were sons of a retail merchant Daniel B. Pelton and Elizabeth Cook, and the grandsons of the original Phineas and Rachael Pelton of South Gower. Since 1842 the well-known Pelton Family has lived and served in the Oxford-on-Rideau and South Gower Townships, now called North Grenville. In the early 1870’s, Daniel B. and wife Elizabeth moved their young family to Kemptville, leaving the homestead and farming to his brother, Phineas Junior. Daniel E. would have begun and finished his schooling at the newly-built combined Public and High School, located at Oxford and Rideau streets. Charles, eight years younger, also attended the Public School for his elementary grades. Then he transferred to the new High School at 304 Prescott St. While Charles attended high school, Daniel taught at the Public School and his older sister Emma taught music.

In 1895, Daniel secured old Samuel Martin’s Photography shop on Prescott Street. He modernized the studio and used the most current equipment and methods of the time. Over the next six years he earned the trust and respect of his clients and of those who knew the art. He also added a branch shop in Merrickville. Charles likely learned the business from Daniel during this time, and then started his own business in Carleton Place around 1900. It is quite possible that at this time Daniel hired an assistant, Miss Margaret Pettapiece. A year later, on June 2, 1901, tragedy struck and Daniel died. He was only 32 years of age.

Charles, not yet settled in Carleton Place, returned to Kemptville and continued where Daniel had left off. It was with Daniel’s same high standards and keen attention to detail that Charles maintained a faithful clientele and business thrived over the next decade. There are many excellent examples of both Daniel’s and Charles’ work in the North Grenville Archives and at Library and Archives Canada.

Charles’ greatest competition wasn’t from visiting (“traveling”) photographers, however. It was from new technology, with the invention of the first Brownie cameras, and roll film, which placed photography into the hands of the masses. By 1914, when his father died, business was drying up. Invention and mechanization were also changing farming techniques. Small farms could not compete. For the next few years, Charles supplemented his business by becoming an agent for the sale of farm properties in the area. He kept his photography studio on Prescott Street where, in addition to his photographic business, he would display and sell the new phonographs for his cousin E.C. Pelton. After the Great War, he would also purchase war bonds from willing sellers. From these hard times Charles learned new and useful sales skills.

The last known photograph from Pelton Studios was in 1922, as Charles embarked on a new course. In February of 1922, Charles partnered with George Reynolds, of Johnston & Reynolds (Furniture and Funeral Directors), and began Kemptville’s Ford Dealership on Asa Street, known as Pelton and Reynolds, which lasted until the 1950’s. Shortly after 1922, Charles married Lillian Foster, the widow of Dr. Ruby. They lived in the home next to his business until his death on August 29, 1965, age 89. Lillian died the next year, age 84. 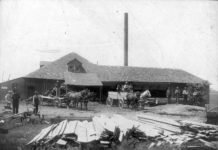 What can you tell us about this photo?