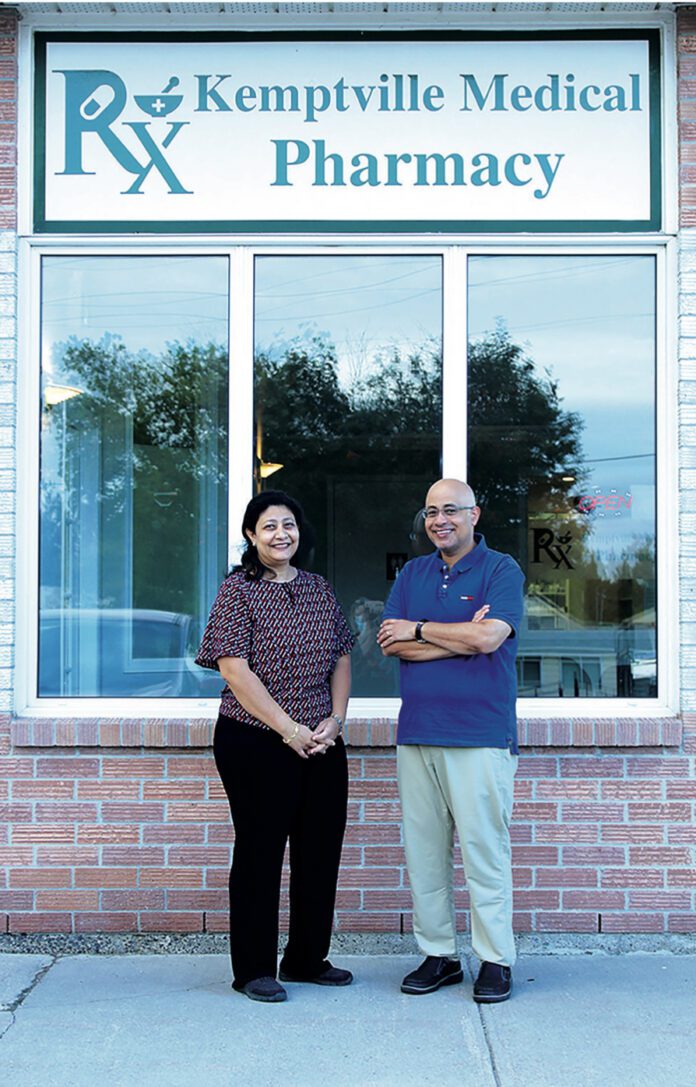 A new couple in town is hoping to get to know the community through their pharmacy located in the Kemptville Medical Centre on County Road 43. Samir and Gigi Rofael moved from Egypt with their two young children in 2010. Samir says they came to Canada to escape the conflict in the Middle East and provide a better future for their kids. “Here in Canada it’s a better place for our kids to interact with different cultures,” he says. “I think growing in a kind of country like Canada will add a lot to the personality of our kids for their future.”

Both Samir and Gigi were pharmacists in Egypt and had to pass three rigorous exams in order to become licensed in Canada, where they were tested on their pharmaceutical knowledge as well as their practical skills in helping and advising patients. For the past 10 years, Samir has been working as the pharmacy manager at an Ottawa-based pharmacy dedicated to serving seniors in community retirement and nursing homes. Before opening their pharmacy in Kemptville, Gigi was working as a pharmacist in several different corporate pharmacy stores. Gigi is now the pharmacy manager in Kemptville, while Samir is still working in Ottawa while they get the store off the ground.

Not only do they both have an extensive background in pharmacy both in Egypt and Canada, but Samir also has an MBA and worked in sales and marketing for an international firm before they moved to Canada. “[I wanted] to start a new business, not actually as an entrepreneur, because the business of pharmacy is always there, but just to have our own business,” he said.

It has always been their dream to have their own pharmacy. Part of that dream was to open their pharmacy in a small town where they could really get to know the community. Samir says they both enjoy creating relationships with their patients and being able to help them not only with their pharmaceutical needs but their general health and wellbeing. “If you work in the job of a pharmacist, it is very interesting the kind of interaction between you and the patient,” Samir says. “The feeling that the patient considers you as a kind of reliable source for all their troubles.”

The Kemptville Medical Pharmacy officially opened on August 24, Samir and Gigi’s 21st wedding anniversary. According to Samir, the location for the pharmacy in the Medical Centre is ideal for patients and will help streamline service between the five primary care physicians who work there and the pharmacy team. “It is very convenient, because you can get the full support of the pharmacist interacting with your physician for any clarification of the prescription, for any kind of drug interaction or if you wish to have prescription renewal service,” he says. “It’s kind of complementing the clinic.”

It is the passion for the business that drew him and Gigi to open their own pharmacy, even in the current climate of COVID-19, when a lot of people are avoiding starting new ventures. He believes strongly in building relationships with patients and being a reliable, thoughtful, and empathetic source of information for all their pharmaceutical needs. “We still have our dream and our vision to be part of the Kemptville community,” he says. “We need to help clients and be a part of the comprehensive solution for those visiting the Kemptville Medical Centre as well as any other patients looking for a consultation or new pharmacy.”

The Kemptville Medical Pharmacy is now open at 2670 County Road 43 in the Kemptville Medical Centre. It is currently open from Monday to Thursday from 8am-7pm, and Friday and Saturday 8am-12pm. “My slogan is convenience, peace of mind, and quick service which is the most important thing for the patients going into the clinic,” Samir says.

“As well as a community pharmacy, we want to have the kind of place that offers solutions, consultations and advice to all the people dealing with our store.”