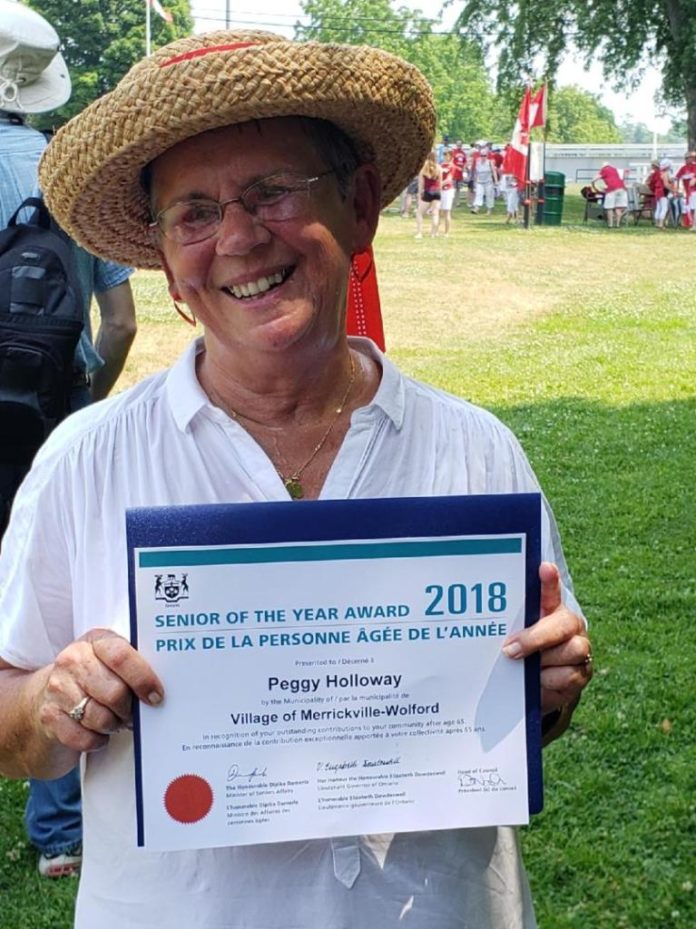 Merrickville-Wolford resident, Peggy Holloway, was honoured on Canada Day with the municipality’s Senior of the Year award. The Ontario Senior of the Year Award is given by a municipality to recognize an outstanding senior who enriches the social, cultural, or civic life of the community. Peggy is a dedicated volunteer and has been a part of many organizations and events in Merrickville-Wolford over the years.

A Merrickville native, Peggy left the municipality for a few years to pursue a degree in pharmacy at the University of Toronto, but eventually returned to the Village to continue raising her daughter and be close to her family. Her father was the founder and owner of Grenville Castings, which was the primary employer in the community for many years. She inherited her family home from her parents when they passed away, and now has the pleasure of living in the same house she grew up in. Peggy says her mother paved the way for her community activism, winning the same Senior of the Year award in 1999.

Her lifelong friend, Gail Telford, says Peggy has been involved in many organizations, including the North Grenville Concert Choir, Singin’ Seniors Choir, Fair Board, and Christmas in Merrickville. She and Peggy also started the Beach Buddies, and lobbied council to clean up and take care of Merrickville’s beach, so it could be used by residents. “She always sets really high standards for herself and those that she works with,” Gail says.

Through all her volunteering and involvement in the community, Peggy’s greatest achievement is the Merrickville Jazz Festival. “I was looking for something to do in retirement,” Peggy says about spearheading the Festival. “It was something completely different from what I was doing.” It started in 2011 as a very small festival, drawing about 200 people to the Village for the live jazz. Now, in its 8th year, the Merrickville Jazz Festival draws between 3,000 and 4,000 visitors annually to Merrickville. “It helped put Merrickville on the map for music,” Peggy says.

Gail says Peggy is a community advocate and great friend. “Peggy gets everyone together,” she says. “She keeps up with every friend she has ever had.” Peggy is very modest about her work in the community. “There are so many people that do so much,” she says. “One never does anything on their own.”

That being said, it is clear from the enthusiasm of those around her that Peggy is a true leader and a staple of the Merrickville-Wolford community. “I have the utmost respect for Peggy and whatever she wants to do,” says Merrickville-Wolford resident and friend Wendy Stokes-Earl. “[She] loves the village she was born in, and loves to promote it whenever she can.”