There are very few more potent symbols of Canada and Confederation than the Centre Block on Parliament Hill, with its magnificent Peace Tower, which speaks of Canada’s precious role in peace-keeping and peace-making over the past 150 years.

But the Centre Block is not the original home of Canada’s House of Commons and Senate. In 1916, after standing for just over fifty years, the first Centre Block was destroyed in a disastrous fire, leaving only the Library standing unscathed.

The first Parliament building on parliament Hill was built between 1859 and 1865, before Confederation was a definite scheme, and was designed as the home of the Legislative Assembly and Executive Council of the Province of Canada. The Assembly had been moving between Toronto and Montreal since 1844, and it was not until the last day of 1857 that Queen Victoria announced that the capital would move permanently to Ottawa.

The contract for building the new Parliament building was awarded to Thomas McGreevy of Quebec City, Canada East on 27 November 1859 and the original contract cost, which covered both the Centre Block and Victoria Tower, was $348,500. The building had been scheduled to be completed by 1862, but delays and amendments meant that it was many years after that before the final scaffolding was removed. Nevertheless, the Legislature began to use the building in June 1866. The final cost of the Centre Block and Victoria Tower ballooned to $1,750,720, or around five times the original estimate. 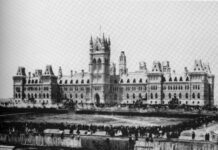