April is Parkinson’s Awareness Month and there are several initiatives going on in the area to raise money and awareness for the disease. Pat Evans was diagnosed with Parkinson’s 13 years ago. Although she says she is lucky, because her form of the disease is progressing more slowly, she does believe that being proactive about managing her symptoms has made a world of difference. “I think that, if people who have it took a more proactive approach, they would do much better,” she says. “There are always things you can do no matter what.”

Pat also believes that early diagnosis is key. Early symptoms of Parkinson’s Disease take many different forms and, therefore, aren’t necessarily addressed. Things like vision issues, handwriting changes, constipation, sleep disorders, depression and fatigue are all symptoms of Parkinson’s but are often overlooked. “If you have four or more symptoms, it’s worth talking to your family doctor,” Pat says.

This is true, no matter your age. Although the average age of diagnosis is 60, there are many people who are diagnosed before the age of 40. “It’s not just an old person’s disease,” Pat says. “I know someone who started getting symptoms at 38, but wasn’t diagnosed for 10 years.”

Pat believes some of the barriers to early detection stem from fear. She says people are terrified of having Parkinson’s, afraid that they will lose their jobs, or be treated differently if people find out they are ill. “People don’t think they can do anything about it,” she says.

The reality is that there are lots of programs out there that help people living with Parkinson’s manage their symptoms. Pat participates in a Parkinson’s specific boxing class that helps keep her body moving and her mind sharp. She also says that stretching multiple times a day helps make sure her muscles don’t get too tight. “Exercise is the most important thing you can do,” Pat says.

She has been travelling around, asking municipal councils in various local towns to declare April Parkinson’s Awareness Month and spread the word about the disease, treatments, and benefits of early detection. “There is help and there is hope,” is her message. “There is lots you can do to lead a happy and fulfilling life.”

To mark Parkinson’s Awareness Month, 17 different coffee shops in the area are using special Parkinson Canada sleeves for their coffees. This includes The Village Bean in Merrickville. “Everybody has been very enthusiastic and responsive,” Pat says, adding that some Tim Hortons and McDonalds owners were also interested, but couldn’t participate because of company regulations.

Things are also in the works for the area’s third annual Parkinson SuperWalk in September, for which they are currently looking for sponsors. “We are hoping to get even more than last year,” Pat says. Registration for the walk on the Parkinson SuperWalk website will open at the end of April. 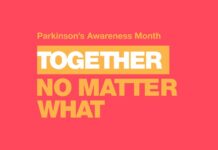