Parents of elementary school children in the Upper Canada District School Board (UCDSB) are concerned about the Board’s new COVID-19 plan that was rolled out on Monday. The Board’s plan includes four different learning models that allow families to choose whether they want their children to learn in-person, online synchronously from home, online (digital) asynchronously from home, or offline (non-digital) asynchronously from home. Originally, the two first options were to be administered by teachers at the school, who would be teaching students both in class and virtually, in real time. Both the asynchronous models were to be taught through a virtual school set up by the School Board, similar to what they did for their high school students.

However, the UCDSB was not expecting the volume of students who would opt for asynchronous learning, and has stated that they don’t have the qualified staff to support a virtual school for their elementary school students. According to a UCDSB staff presentation at the board meeting on September 23, a total of 1,931 students signed up for the asynchronous digital and asynchronous non-digital models. Staffing a virtual school would mean collapsing in-person classes, making them larger, when the UCDSB’s goal is to deintensify schools and classrooms as part of maintaining optimal conditions in light of COVID-19.

Instead of the virtual school, the Board announced last week that in-class teachers would now be responsible for teaching all four models. This means that teachers would have to juggle their full class load, which would be comprised of in-class students and synchronous at home learners, as well as students following both the asynchronous models.

UCDSB parent, Jessica Roberts, believes this new plan puts an immense amount of pressure on teachers and will not serve students well. Jessica’s daughter has special needs and is immunocompromised, so she will be doing synchronous learning at home. Jessica’s main concern is for the teachers, who have always been amazing supports for her daughter.

“I felt that it was completely unfair to put that undue stress on any educator, as they are already having to deal with in-person teaching, live streaming, not to mention implementing all the very rigorous safety protocols,” she says. “It is an added stress that they never had to have before, and I felt that those things were more than enough to handle.”

Director of Education, Stephen Sliwa, said at the board meeting that UCDSB teachers are already used to accommodating a wide array of program differences that make up the modern classroom, including special education and English as a second language learners.

Superintendent of Schools, Susan Rutters, noted that classroom teachers will also have the support of 29 teachers in their Distance Learning Department, who will help prepare materials for asynchronous learners that they can use at their discretion. She also said this model will allow students to move between synchronous and asynchronous learning seamlessly, as their needs, or the restrictions of the pandemic, evolve throughout the school year. “Whether [the teachers] are serving them face to face, or synchronously, or asynchronously, is really a matter of a conversation between the principal, the teacher, and the parent to determine what model it is that they would require at a given time,” she said.

Several trustees around the board table had concerns about the plan, specifically the effect it would have on their teachers and the quality of education for the asynchronous students. Ward 6 and North Grenville Trustee, Lisa Swan, noted that the new asynchronous model is not what parents signed up for at the beginning of the year. With teachers already working full time, she is concerned that they might not have a capacity to address the needs of the asynchronous learners, along with those of students in the classroom. “I don’t think we’re supporting asynchronous learners enough with this model,” she said. “Can we not invest more in this area?”

Susan says that, with the asynchronous model, the expectation was never to have access to a teacher during the regular hours of the school day. She hopes that classroom teachers will be able to respond to inquiries from asynchronous students and parents within 24 hours.

Jessica, as a parent of a child with special needs, knows that teachers have to juggle the needs of the various students in their class. “This is above and beyond that juggling,” she says. “My fear is that, come October, like Thanksgiving, there will be teacher burn out.” She also says that, with this plan, there will most likely be a lack of quality education for students with special needs. “There just won’t be the time to put that effort in.”

Jessica has created a petition online asking the School Board to reconsider their plan and create one that puts students first. The petition is also asking for the Board to undergo an independent audit to impartially assess their financial situation, and for Director Sliwa and Trustee Chair of the Board, John McAllister, to resign. As of the end of last week, it had over 3,000 signatures.

Jessica agrees with what board staff said in the meeting: that they are facing unprecedented times. However, she believes this means they need to come up with an unprecedented solution. “Be creative in thinking how this can be done,” she says. “I find that they are not being creative at all.”

UCDSB Board of Trustees Meeting 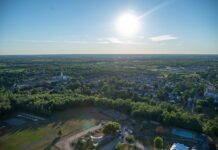 Assessment Centre will Catch The Ace