The gym at Oxford on Rideau Public School was a lively place on Thursday evening, at the grand opening celebration of the Oxford on Rideau Tech Club. The technology-based learning program is the brainchild of Brent and Katie Lekx-Toniolo, who came up with the idea to help Oxford on Rideau stand out and, hopefully, to save it from closure. Oxford-on-Rideau Public School was on the list of 29 schools slated for closure in the Upper Canada District School Board District that came out in September, 2016. “The UCDSB were in a tight spot, but we were determined to save our school,” it says on the Tech website.

Brent and Katie were inspired to create Oxford on Rideau Tech by their experience with a robot in their own home. They bought a small robot for their girls, and couldn’t help noticing all the educational opportunities that came with it. It was their eldest daughter, Addyson (who was 8 at the time), who suggested they bring “Spark”, the robot, to school, so she could teach the younger kids how to use it. “We ran with it,” Brent says.
On March 2, 2017, Brent and Katie presented their idea to the board and it was very well received. Following their presentation, they held two Hour of Code days at the school in June, and they officially started offering programming to all the students at Oxford-on-Rideau starting in October of this year. “Every child has been through at least three classes this year,” Brent says. “The first official class was October 24.”

With the help of fundraising in the community, they were able to raise almost $2,200 to cover operating costs and buy twelve Sphero SPRK+ robots to be used at the school. The small spherical robots are controlled by an iPad and can help teach everything from shapes and colours to more complex coding. They were even being used at the event to create an art piece to be hung somewhere in the school. “Our goal is to get [the kids] involved in computer science and technology at an early age, so that it becomes second nature to them,” Brent says. “The best part is seeing the kids run with it.”

MPP Steve Clark, Mayor David Gordon, and several school Board Trustees were on hand at the celebration to show their support for this innovative program. “It’s incredible that it has been able to come so far, so fast,” MPP Steve Clark told the crowd. “Ease with technology is the best thing we can give to our children.”

The students are just as enthusiastic as the parents about the program. The kids in attendance were given the opportunity to play with the robots, and it was impossible not to be hit by a colourful robot rolling around the floor, being controlled by an excited kid hopped up on celebratory robot cupcakes. Ashley Devries, the mother of kindergarten student Easton Devries, says he loves the tech classes. “He’s a hands-on learner, so it’s good [for him],” she says. “I think it’s great, considering everything is becoming so robotic.”

With the success of this first phase of the program, Brent says they are looking at bringing even more technology into the school in the coming years. In September, 2018, they hope to acquire a 3D printer, and a NAO Robot that can walk, talk, and interact with the students is on the wish list for 2019. 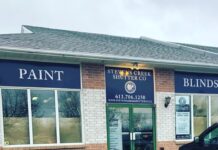