The only remaining operational church in Oxford Mills will be closing at the end of the month. It was announced via social media that the Oxford Mills United Church will cease operations as of December 31 of this year.

Whether or not the church would be closed was first discussed several months ago. In September, a meeting took place at the church for the purposes of discussing whether it was viable for it to stay open. Prior to the meeting, the church shared some statistics on the financial difficulties it was facing.

The yearly operating costs of keeping the Oxford Mills United Church open range from $18,000 to $19,000. Considering that this figure includes both the physical operating costs for the building and property, as well as the part time salary of the Minister who is shared by other churches, the cost is relatively low. However, in recent years, a shrinking congregation has only been able to provide donations of about $5,000 annually in the collection tray.

The letter, which was sent to members of the church in August, notes that while the COVID-19 pandemic had some effect on the dwindling congregation and donations, the fact is that the number of people attending services at the church has been slowly subsiding for years. The letter appeared to be at least in part aimed at increasing community support for the church, though with the closure announcement, it is clear that the financial situation has not improved enough to keep the doors open.

According to a study completed earlier this year, over half of all Canadians report never attending church, and only 23% report attending church at least monthly. This is a significant change from decades past, when attending church every Sunday was an unwavering tradition for most households.

As of the time of the closure announcement, only two more services were expected to be held at the Oxford Mills United Church. One of these services has already passed, on December 4. This service was a “decommissioning service”, given by a guest minister and featuring musical performances. Coffee and desserts were also provided following this last regularly scheduled service. One more service will take place on Christmas Eve, December 24, and the church has made it very clear that all are welcome to attend. For many, this will be the last opportunity to set foot inside the historic local church. 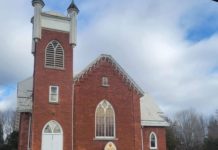