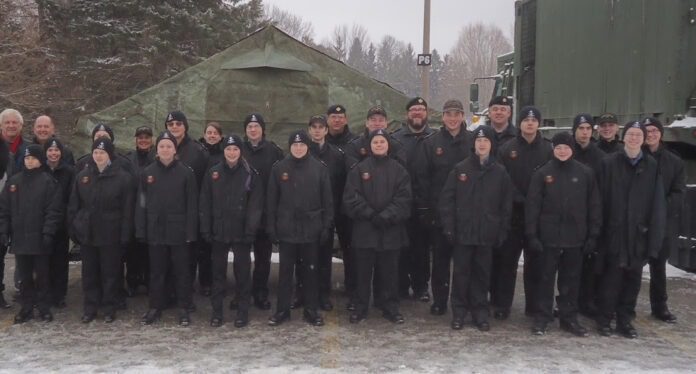 I’m sure that the convoy of military trucks and equipment that rolled into Kemptville late Friday night raised the eyebrows of a few local residents. They were headed for Kemptville Campus for exercise ‘JADE SAVITAR’. The exercise consisted of establishing a field headquarters and the deployment of telecommunications equipment. They arrived on Friday night at 10 pm amid one of the coldest snaps of the winter and quickly set up their headquarters and equipment both inside and around the Purvis Hall building.

The exercise was conducted by two reserve units from Ottawa, the 33 Signal Regiment and the 7 Intelligence Company. Two large communications trucks, one large outdoor tent and two large pieces of antenna equipment could be seen to set up outside the building and numerous computers and other communications equipment were set up inside on the main floor of Purvis Hall. There were approximately 90 soldiers participating between the two units, with one part of the group actually set up about 1 km away out on the campus grounds and another in Limerick Forest. Some of the electronic warfare equipment that was used is very specialized and is only being used by one other reserve unit in all of Canada. One of the pieces of equipment used was a big, green satellite antenna that is inflatable and shaped like an eight-foot tall soccer ball. When not inflated, it can be stored in a small box. It is fondly known as a ‘Gator’ to the troops that use it, as it is manufactured by a US company named GATR.

Lieutenant Shareif Mahmoud, the Public Affairs Representative for 33 Signal Regiment, was very gracious with his time and knowledge as he shared information about the exercise itself, and the two units involved. He also took time along with a handful of other soldiers to escort members of North Grenville Council and members of the two local sea cadets units around the exercise compound and answered their questions. Lieutenant Mahmoud said that these types of exercises are very important to the units as they get a chance to: verify equipment functionality, troubleshoot equipment in a ‘live’ environment and to get new members of the unit some field experience.

When asked what some of the soldiers thought of the campus as a location for this type of exercise, Lieutenant Mahmoud said that he had heard very positive feedback from the troops. Kemptville and the campus are an ideal place for them because it is an urban setting that has lots of space to allow them to spread out their operations. The location is only about an hour’s drive from the unit’s home in Ottawa. 33 Signal Regiment and other Ottawa units often conduct exercises at Connaught Ranges in Ottawa. Lieutenant Mahmoud shared that the troops enjoyed the change of scenery and being outside of Ottawa for a weekend. He also made a special point of wanting to say ‘thank you to the people of Kemptville who were very gracious and welcoming’. 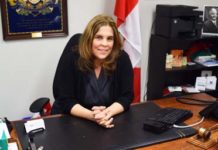