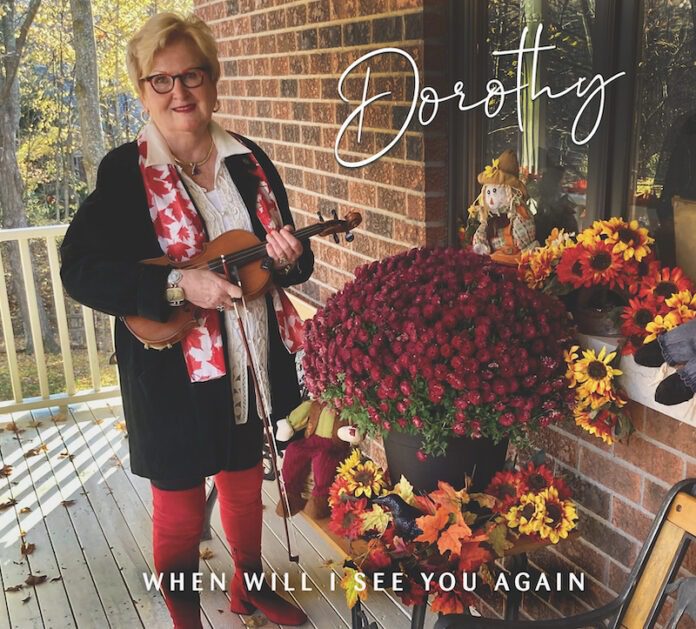 Dorothy Goubault has lived a life filled with adventure and love. She grew up on a horse farm outside of the small Ottawa Valley town of Douglas, west of Renfrew. She describes her professional life as “barnyard to boardroom,” having now retired from a successful career with the Department of National Defence where, among other roles, she was appointed as an Adjudicator/Judge with the Veterans Review and Appeal Board.

Music – including singing, dancing, and fiddle tunes – have always been part of Dorothy’s life. However, it was only a few years ago that she began taking fiddling lessons. These lessons have paid off, as Dorothy has now recorded a full CD, though this is something she had never planned to do. The CD is dedicated to her late partner, Gerald Arthur McBride, for whom she wrote one original track on the CD, called “When Will I See You Again”.

Gerald passed away on February 13, 2020. Above all, Dorothy remembers how devoted and supportive he was, even at the time of her life when she could describe her home as “anywhere in Canada”. Gerald was always there to support her. “He took me to the airport Sunday mornings, and picked me up Friday nights,” Dorothy said. “Gerald was my rock.”

After Gerald passed away, with the COVID-19 pandemic hitting suddenly just a month later, Dorothy felt very isolated. She found it difficult to talk about Gerald’s death, except with a few people close to her, and she lost her “voice”. As time passed, Dorothy noticed a familiar phrase that would pop up at the end of visits with close friends – “When will I see you again?” Dorothy sought professional advice on why these words had become so impactful to her. She realized that she had developed a fear of not knowing when she would see friends and loved ones again, and, in particular, not knowing if she had adequately conveyed how much she loved these people and how much they meant to her. One early Saturday morning, she awoke with the same words (“When will I see you again”) repeating in her head, and she instinctively began to write her song of the same name, despite never having written a song or a poem in her entire life.

“When Will I See You Again” is an upbeat tune, prominently featuring fiddle and vocals. It tells a tale of a life lived and loved, with each verse returning to the yearning for seeing a lost loved one again. The song is the first track of Dorothy’s CD of the same name, which features nine other tracks, all covers of various traditional fiddle tunes. The album cover for her CD features several pictures, each holding great importance for her.

“The history is in the cover of my CD,” Dorothy said. “I have always intended to write my autobiography, taking me back to my childhood life in the Valley, and a journey through my travels around the world.” The CD was produced by Summit Sound outside of Westport. Dorothy credits Dave and Kathy Daw with the design work of the CD cover, both inside and out. She also credits Don Reed, who is the guest fiddle player playing the harmony for the fiddle tunes on the CD.

Dorothy’s CD is now gaining much attention. It is selling for $20 per copy, with all net proceeds being donated to the Ottawa Heart Institute for research, since Gerald, his mother, and Dorothy’s father all had heart problems. Now, Dorothy is working with approximately a half dozen radio stations to get her music out into the world. She is booked for the World Summit for Women in Bangkok in June, with a booth booked to sell CDs. Further, the Ottawa Heart Institute has also offered to relay Gerald’s story – and a mention of Dorothy’s CD and a book she is writing – in its fall quarterly magazine.

It would appear that Dorothy has found her voice. “There is no doubt in my mind Gerald sent Angels to take my hand and guide me through the most difficult time of my life,” a part of Dorothy’s CD cover reads. Those seeking more information can email Dorothy directly at [email protected].