On September 27, around 2:00 p.m., officers from the Grenville County Detachment of the Ontario Provincial Police (OPP) began an investigation into a report of a break-in at a home on County Road 23, Wolford Township. Investigation indicated that a culprit entered the home while the resident was there. A second individual was attempting to enter the house through a different door. The resident intervened and the culprits left in a blue truck.

The first individual is described as a Hispanic looking male, approximately 5’7″, mid-twenties with shoulder length hair that was tied into what’s described as French braids. He was wearing black jeans with tears on the knees, running shoes and a dark blue hoodie. There was no description for the second person.

An investigation continues. Anyone with information is asked to call North Grenville OPP.

On September 27, 2019 around 10:00 p.m. officers from the Grenville County Detachment of the OPP received a traffic complaint for a vehicle driving erratically on Bedell Road, North Grenville. Investigation revealed that the adult driver was under the influence of alcohol.

He was released and is scheduled to appear at the Ontario Court of Justice in Brockville on October 25.

If you have any information on the above investigations or any other please contact Grenville OPP on 1-888-310-1122 or Crime Stoppers at 1-800-222-(TIPS) 8477 or submit your tip on-line at www.tipsubmit.com. Crime Stoppers does not want your name, you don’t go to court, and you could earn cash reward. 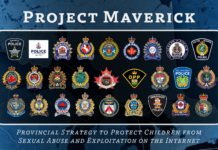