The Ontario Provincial Police (OPP) have seized 46 firearms after a traffic stop was executed on Highway 401 east of Prescott. 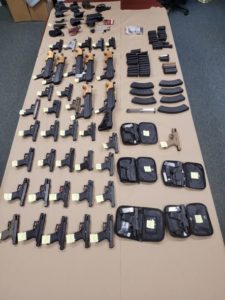 As a result of a six-month firearms trafficking investigation led by the Ottawa Police Service (OPS) and assisted by the Canada Border Services Agency (CBSA), OPP officers from the Provincial Weapons Enforcement Unit (PWEU) and Grenville County Detachment executed a traffic stop on Highway 401, east of Prescott on September 7, 2022. Cornwall Police Service also assisted with enforcement action in the City of Cornwall.

Two males,  both 31 years old from Ottawa, were arrested and charged with the following Criminal Code (CC) offences:

One  was also charged under the Controlled Drugs and Substances Act (CDSA) s. 4(1) for Possession of Schedule 1 Substance – Cocaine.

Both accused were held in custody and are scheduled to appear at the Ontario Court of Justice in Brockville at a later date.