On April 27, shortly after 2:00 p.m., Grenville County Ontario Provincial Police (OPP) officers received a report of a fraud that had occurred the week before. A victim from Prescott, Ontario had been contacted by someone claiming to be a lawyer from Toronto. The alleged lawyer advised her that her son had been involved in a drunk driving accident and would need immediate funds for bail. The victim wired over ten thousand dollars to the account provided. The investigation is still ongoing.

If you are unsure whether you are being scammed, contact the police or the Canadian Anti-Fraud Centre’s website at www.antifraudcenter.ca for more information.

On April 30, shortly after midnight, Grenville County OPP officers conducted a traffic stop on County Road 43, in North Grenville. The driver was spoken to and was consequently brought back to detachment after being arrested. A man, aged 37, from Kingston was arrested and charged with: Possession of Schedule 1 substance – Meth- amphetamine, contrary to Controlled Drug Substances Act section 4(1); and Failing to Comply with release orders contrary to Criminal Code (CC) section 145(5)a – Two counts.

The accused was released and is scheduled to appear at the Ontario Court of Justice in Brockville on August 7, 2020.

On May 2, Grenville OPP officers recovered a set of ATV tracks between the Kemptville and Osgoode area. The tracks are for a Polaris ATV and were manufactured by Soucy International in Quebec. See photograph attached. 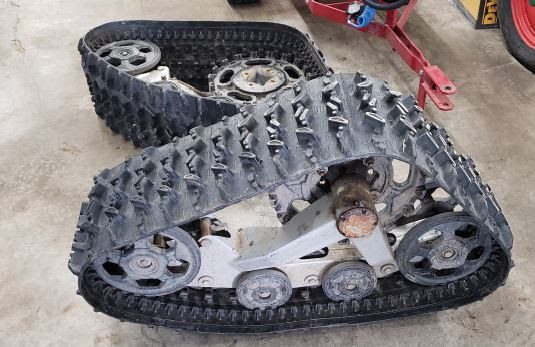 If you have any information on the above investigations or any other please contact Grenville OPP on 1-888-310-1122 or Crime Stoppers at 1-800-222-(TIPS) 8477 or submit your tip on-line at www.tipsubmit.com. Crime Stoppers does not want your name, you don’t go to court, and you could earn cash reward.