Students in the North Grenville High School musical theatre class have been very busy over the past few weeks preparing for their production of Oliver.

The course, which is offered to students from grades 7 through 12, is for credit and allows the students to be involved in all aspects of the production. The class is offered after school hours and on the weekend as opening night draws nearer.

Sarah McKibbin first signed up for the course when she was in grade 8. Now in grade 11, she has one of the lead roles in the musical. “I love performing and being part of something,” she says. “It’s really cool. There aren’t a lot of other opportunities [like it].”
Meredith Island, one of the teachers who runs the class, says they picked Oliver this year because it was a musical everyone could agree on. It also has a large cast, which is important because of the course’s popularity. There are 45 students involved in the production this year.

The students have been working hard on the production since October. While everyone in the class is guaranteed a role, students still have to audition for the parts by performing a monologue and a song. The students are also responsible for creating the choreography and designing the set and costumes, with the support of the teachers and some parents. Bev Bonner, whose daughter, Alyssa, plays multiple roles in the production, says The Score in the Kemptville Mall, and the Salvation Army, have been fantastic in supplying them with cheap material and clothing for the costumes. “All of the pants are made from bedsheets,” she says.

Sarah says she is full of excitement and nervousness about opening night. “I’m excited to show everyone what we’ve come up with this year.” 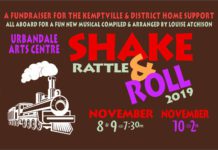 Students hard at work on Loserville the Musical