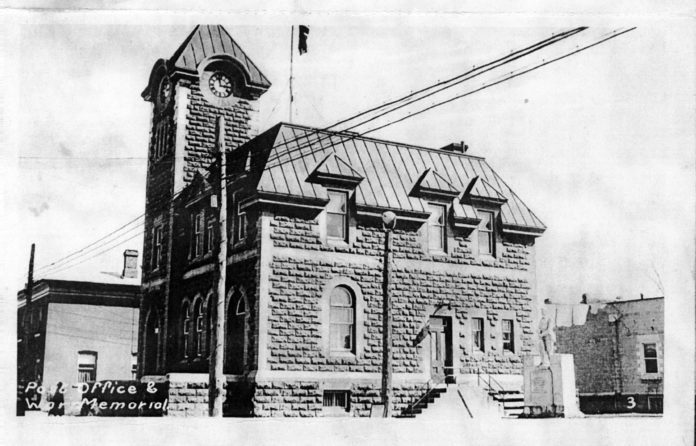 Before the fire of 1873, John Magee, a tailor, had a store on this site. After the fire, he built a new stone building and carried on his business there until 1895. The town’s Library operated on the ground floor, with Mrs. Holmes as librarian, and her family living upstairs. The building was taken over by the Bank of Ottawa in 1895, the first banking institution in Kemptville. The Bank of Ottawa later became amalgamated with the Bank of Nova Scotia. The Bank moved premises further up Prescott St. in 1907, and, after a fire in 1915 which destroyed the Mundle & Percival store next door, it became the site of the new Post Office and Cenotaph. The Post Office was designed by David Ewart, who was Chief Dominion Architect from 1896 to 1914. The Post Office must have been one of his last designs in that position. A square tower on the building had four clock faces, one facing in each direction. On the rear of the upper portion of the building was a bell, and a large hammer rang out the hours. This building became a landmark in Kemptville for decades, before being demolished in 1970. The cenotaph had been moved to the High School grounds the previous year. The once busy corner lot is now a quiet green space.