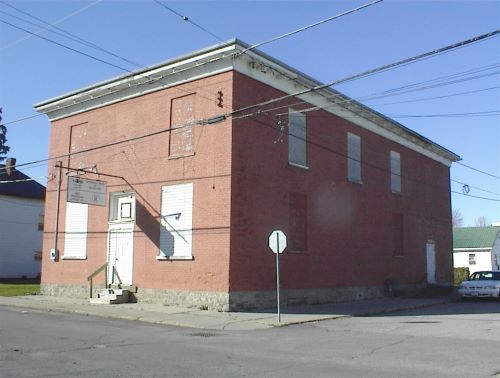 For the past one hundred and thirty-one years, the Odd Fellows Grenville Lodge #279 has been a mainstay of everyday life in Kemptville, North Grenville, and the surrounding townships. The Odd Fellows order started in England in the mid-1700s, with the first lodge in the United States opening in 1819, and the first in Canada opening in Montreal in 1843.

At that first meeting, the following gentlemen were duly elected to the board: Brother A.G. Rutherford, Brother G.E. Hanna, Brother J.H. Stitt, Brother Thomas Conley, and Brother J.A. Jones. Deputy District Grand Master Ronan from Ottawa Lodge #224 was declared the elected representative of Grenville Lodge #279 to the Grand Lodge of Ontario, and P.G.H.J. Guppy of the Carleton Lodge #240 was declared Grand Secretary, thus starting continued interaction between the Ottawa and Grenville Lodges that lasts to today. At the first meeting, applications for membership were received from 39 men, and included in the prospective membership were names that still resonate in 2021: Beach, Clothier, Patton, Curry, and Paterson, to name but a few.

Following the inaugural meeting, an arrangement to rent a hall from the Ancient Order of United Workmen was agreed to. The cost was $1 per meeting and included oil for light, wood for heat, and the services of a janitor. In early 1892, Grenville Lodge #279 had outgrown the hall provided by the A.O.U.W. Following much discussion, the A.O.U.W. was asked to build an addition on to their hall to house all the Odd Fellows furniture and regalia. When this was refused, the Grenville Lodge started to look for a permanent home of their own.

Joseph Bower was one of the first general merchants and distillers in Kemptville. His house and store were both built on the south side of Clothier Street on either side of Lydia Street. Neither of these buildings remain today, but his second store, which he started to build in 1859, stood on the north-west corner of Clothier and Barnes Streets and remained a general store until 1870. During the twenty-two years between 1870 and 1892, when the Odd Fellows purchased it, the building housed a tailor’s shop and was later converted to a hall and opera house. By 1892 it needed repairs, and following negotiations, was sold to the Grenville Lodge for $1,350.00. Funds to pay for the building were raised through private donations and the sale of outbuildings that were on the ¼ acre property. The opening ceremony for the new home of Grenville Lodge #279 was held on July 11, 1892.

Following purchase by the Odd Fellows, the hall continued to be used for community and private events, such as the Fireman’s Ball, which featured a full course meal followed by a dance. During the 1940s, movies were shown there every Saturday night.

Sadly, with the sale of the Odd Fellow’s building, the lodge will no longer be meeting there and members will have to look for a new home, but the building itself will progress to a new role – as that of a dental office.

The long and continuing history of Grenville Lodge #279 is contained in the lodge’s incredible document collection. While the lodge will remain active, and involved in local events and celebrations in North Grenville, its historical archive, which documents mergers between several Ottawa Lodges and the Grenville #279 Lodge, has been transferred to the City of Ottawa Archives. Once the collection has been arranged and described, it will be made accessible to researchers.

There is concern that the Odd Fellows Order in Ontario will disappear. In the Province of Ontario there are fewer that 1,000 members. Formed as an organization that offered insurance to its members, it is now purely a service club, and the many lodges that existed throughout Eastern Ontario are slowly disappearing.