The funds were raised at OCPA’s 15th Annual Plowing Fore A Cure golf tournament held on August 14, at Emerald Links Golf and Country Club in Greely.

This year’s tournament was held in memory of Lloyd Cowan, 1922 – 2017. Lloyd was born into a farm family in Metcalfe Corners where he spent his youth working on his family and neighbour’s farms. Lloyd later worked driving a truck for the City of Ottawa, delivered milk, waited tables and drove a taxi. He subsequently started his own Surge milking machine dealership in North Gower and later moved to Manotick where he built his home and shop. Lloyd was heavily involved with the Ottawa Carleton Plowmen’s Association and the International Plowing Match held in Richmond in 1983. Highly regarded in the farming community, Lloyd will always be remembered as a senior statesman of agriculture in Ottawa-Carleton. 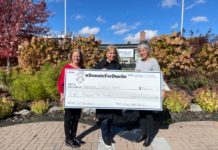