Business and community advocate Debbie Wilson is this year’s recipient of the Bill Thake Memorial Economic Development Leadership Award. Ms. Wilson is the proud co-owner, with brother Rick, of Grahame’s Bakery in Kemptville. This multi-generational family business dates back to 1939. Grahame’s is famous for its baked goods and for supporting its community, including keeping its historic oven going to help feed people during the 1998 Ice Storm’s extended power outage.

Over and above her business acumen, Ms. Wilson deserves praise for her decades of volunteerism and commitment to making her community the best that it can be. She is Chair of the Old Town Kemptville BIA Board of Management and Vice-chair of the North Grenville Community and Economic Development Advisory Committee. She helped found the Kemptville and District Sports Hall of Fame and launch the community’s inaugural Doors Open event. Debbie was also recently appointed by Steve Clark as the provincial representative on North Grenville’s Police Services Board.

“I am at a loss for words because I never ever in my lifetime expected something like this,” said a speechless Debbie after receiving the award

Debbie says she has been inspired by other community leaders like Terry Butler and Paul Cormier to become a champion in the community. She was also inspired by her parents, who were also community leaders in their own right. “It’s just a passion for seeing things progress and to see people doing well in business and community activities,” she says. “Somebody’s gotta do it.”

Warden Pat Sayeau announced her as the winner at the 11th annual United Counties of Leeds and Grenville Economic Development Summit in Kemptville. The event was a sell-out with 217 attendees. Bill Thake’s widow, Marlene, helped present the award.

“Leeds and Grenville is a better place to live because of these active volunteers,” said Warden Sayeau. “We are proud to honour them for the major contributions they have made in their communities and to Leeds Grenville.” 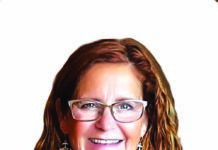 Acknowledgment for a local Champion