September is not only Childhood Cancer Awareness Month, but also the month in which Canadians typically recognize the legacy of Terry Fox. At the Municipal Council Meeting of September 7, Council received two presentations marking the importance of cancer awareness and fundraising.

The first was a presentation from Steven Paterson of the Kemptville Terry Fox Run Committee. Steven said “41 Years ago this April 12, a young cancer survivor by the name of Terry Fox stood on the shoreline in St. Johns’ Newfoundland and dipped his prosthetic leg into the Atlantic Ocean. From there he set off on the Marathon of Hope, in an attempt to run across Canada to help raise awareness and funds for cancer research. On September 1 of that same year, in Thunder Bay, Ontario, Terry was forced to put his run on hold, as the cancer had returned to his lungs. As most of us know, Terry was unable to complete his run, but every year since, people from all over Canada and other parts of the world have come together every fall in pursuit of continuing Terry’s dream and vision of raising awareness and funds for Cancer Research.”

Due to the ongoing COVID‑19 pandemic, The Terry Fox Organization made the decision to make its annual Terry Fox Run virtual again this year. This means that people will independently organize the time and location of their run. Those wishing to participate can register at terryfox.org and register under the Kemptville event. Those wishing to donate to the cause can do so at the same link.

Steven said “Participants can make use of the beautiful trails available in our Municipality or map out a route through their neighbourhood. Last year, with the Terry Fox Flag flying high over the Municipal Centre, North Grenville showed that despite being in the middle of a pandemic, the Terry Fox spirit is very much alive and well.” He went on to ask that Council proclaim September 19, 2021 as “Terry Fox Run Day” and to raise the Terry Fox Flag September 14 to 20. Council unanimously agreed to pass the motion.

Following Steven’s presentation, Kevin Dionne spoke to Council on behalf of the Canadian Cancer Society. Kevin’s presentation was intended to bring attention to the Kayaking for Cancer event. Over the course of eight days, paddlers make their way from Kingston to Ottawa. “We kayak for cancer to show people we care, and to never forget those we have lost,” explained Kevin.

This has been an annual event for 21 years. The event “started with a Kemptville group of people” stated Kevin, “and it now expands across Canada essentially.” Kayaking for Cancer is the #1 third‑party fundraising event in Canada. Kevin says “We have raised over $810,000.” He hopes to see “the 1 million dollar mark” as a figure for overall funds raised in our community. Deputy Mayor Jim McManaman noted that as Canada’s Most Active Community, we should have no problem getting out to achieve this fundraising goal. 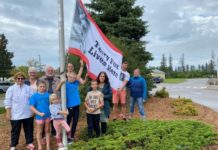 Terry Fox Run season is back 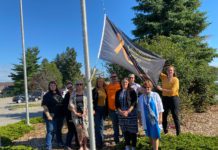 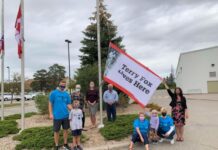