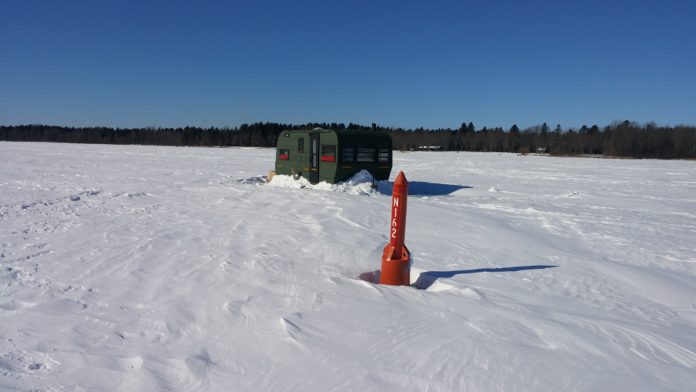 North Grenville missile defense ready to go. Don’t Panic! Steps have been taken to protect us from unexpected missile attacks from either side. The photo here was taken by our intrepid security spy, who shall remain nameless, we will simply refer to him as Nick Brooks. It shows the super-secret North Grenville Missile Defense System, which is located at a secret site in the Ferguson Forest Centre, just to the east of the Kinder Walk entrance, about fifteen feet from the river. Please keep that information to yourself.

The photo shows the missile, which was bought at a Red Army Surplus Store in Vladivostok (hence the colour of the missile) for around 500 Rubles, or about $10, some years ago; which actually explains the 6.18% tax increase that year. The structure in the background is a cleverly-disguised Strategic Air Command Headquarters for North Grenville, which is manned by a municipal staff member once a week. They are equipped with a brand new and ultra-effective box of matches with which to light the fuse on the missile, as soon as a Cruise missile is seen heading in the direction of the Municipal Centre.

Why, you may ask, this extravagant waste of taxpayers’ money? Who would want to attack North Grenville? Once again, and this is very hush-hush information, we have reason to believe that Donald Trump may be thinking about invading Trudeauland, as he calls it, as part of a master plan to Make America Safe Again. His plan, as far as we can understand it, is to annex both Equinelle and Rideau Glen golf courses and build a new Trump Tower in the Ferguson Forest Centre.

According to our Deep State sources, Trump believes that this move will re-establish Capitalism in Trudeauland, as he firmly believes that Canada is a Socialist country and, therefore, a Clear and Present Danger to the Excited States of America. His plans are on hold until he can find out where Trudeauland actually is. He knows it’s somewhere to the north of Florida, and he has asked his good friend Putin for a map showing the location more definitively.

Vladimir Putin, Czar of all the Russias, is also eyeing this part of the continent, and has been known to muse on the need to neutralise a NATO member lying between the client state to our south and the Arctic. However, citizens may rest assured that the Municipality of North Grenville is not without its resources in this matter. Our own missile defense system is ready to counter any such threats. After all, someone has to defend the poor people of Ottawa from the aggression of a stupor power like the Excited States under Trump.

Stay tuned for the latest news from the front.