On Friday last, local dignitaries and representatives from North Grenville’s two French schools gathered at the Municipal Centre to mark Franco-Ontarian Day. Normally, the students from Académie Catholique Notre Dame and École publique Rivière Rideau would have attended the raising of the Franco-Ontarian flag at the Municipal Centre. However, due to COVID-19, the ceremony was live streamed, so that they could watch online from their respective classrooms or at home. 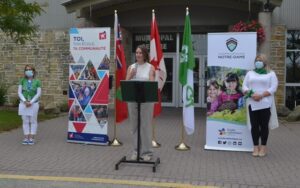 Although Mayor Peckford was unable to attend the ceremony, Councillor Kristin Strackerjan, whose three children go to École Rivère Rideau was on hand to welcome everyone to the Municipal Centre and say a few words to mark the occasion. She mentioned how proud the Municipality is to have two French schools in North Grenville, and that Franco-Ontarians will always be respected in the community. “Nous sommes reconnaissant de votre contribution au développement de l’histoire, de la culture, de la société, de l’économie ainsi que le structure politique de l’Ontario,” she said. “Joyeuse journée aujourd’hui!” 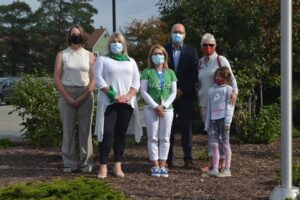 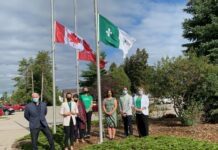