The 14th annual Royal Lepage Women’s Fall Classic was held at the North Grenville Curling Club last weekend drawing teams of women from all over the world.

There were 24 teams in total from all over Ontario, Quebec and even as far away as Iqaluit, Nunavut. International teams included women from Scotland, Switzerland, Sweden and Japan.

The team that travelled the furthest to compete in the 2019 Women’s Fall Classic was Team Yoshimura from Sapporo Japan. The team is playing in four tournaments in Canada throughout their month-long trip. When I talked to them right before they played their first game on Friday, they had already competed in two tournaments: one in Manitoba and another in North Bay, Ontario. One of their teammates, Yumie Funayama has been curling for 28 years and has competed in three Olympic Games for Japan.

The Japanese team is only one example of the high caliber of curling that went on at the Curling Club over the weekend. The skip for a senior team from Ottawa, Maureen Broder, says they participate in the tournament because of the challenge of competing against some of the world’s top curlers. “It’s also close to home and the hospitality is great,” she says. She and her husband, Andy Broder, were hosting Team Schori from Limmattal, Switzerland in their home. The Swiss team wasbeing coached by champion curler Mike Harris who medaled for Canada in the 2010 Olympic Games.

After three days of world-class curling the tournament ended on Sunday evening with Team Wrana of Sweden winning the top prize of $6000 and their names on the Royal Lepage Women’s Fall Classic trophy. 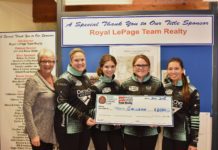 The Rock Stars are coming to Town!

Putting the class in classic