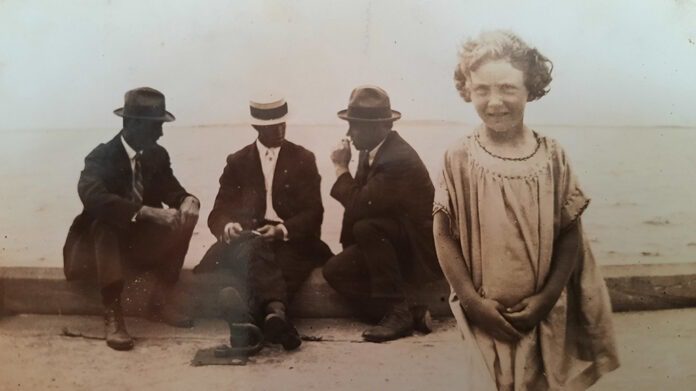 North Grenville is a community with many outstanding, colourful, talented, and active individuals. So, to stand out in that congregation, you have to be rather special. And that is what Norma Fisher is to all who know her (and they are many). Think about it: how many people in North Grenville have had a statue erected in their honour? Norma and her late husband, George, have given of their time and energies to this community ever since they arrived here thirty years ago.

There is deep significance in the fact that the statue shows Norma and George dancing: an activity that everyone will associate with Norma – well, that and curling. And the inscription on the base of the statue expresses so clearly the philosophy that has underpinned Norma’s activities in supporting this community in so many areas. It is a quote from Voltaire: “Let us read and let us dance, these two amusements will never do any harm to the world.”

The reading part is apt also, since Norma and George were co-Chairs of the Room to Read campaign in 2008, which led to the establishment of the North Grenville Library in a brand new headquarters on Prescott Street. There was also a vital involvement in other projects to benefit their friends and neighbours, such as the Kemptville District Hospital and the work undertaken by the Rotary Club. Then there’s her commitment to St. James Anglican Church, the Kemptville District Community Association, and the North Grenville Curling Club. Local M.P.P., Steve Clark once said it well: “You’ve touched pretty well every citizen since you arrived here.”

But it isn’t only her contributions to North Grenville that makes her so loved and admired. In almost every comment made about Norma, the word “classy” is used. And she is a classy lady, whether dealing with serious illness or loss, or adapting her curling style to her age, or simply taking time to smile and talk to everyone, no matter who or where.

It is astonishing to think of all Norma McClenaghan has seen and lived through in her century among us. I have heard her speak about her incredible shyness, inability to speak in public, for so many of those years. But, with George beside her, she conquered that and has gone on to use her public appearances at so many events to greet strangers and friends alike with warmth and genuine interest.

We don’t see her walking along the streets of Kemptville very much these days; but when seen, as in the past decades, the image that comes across is, yes, classy, graceful, and chic. She exemplifies what is meant by having a passionate, caring, and devoted concern for her friends and neighbours, and is an inspiration, in the best sense of the word, to us all.

Happy 100th Birthday, Norma McClenaghan Fisher. We are happy and grateful to have you live among us. 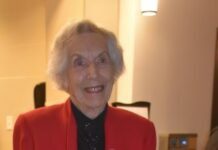 Thank you from Norma Fisher 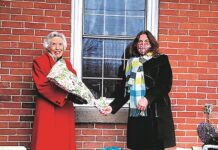