The original contract to build the vehicle was awarded to Arnprior Fire Trucks Corp. (AFTC), which is a local specialized fire truck manufacturer. During construction, AFTC sold its business assets to Eastway Fire and Rescue. Though it delayed construction, the end result was the same, as the vehicle ended up being built in Arnprior by the same people, using the same equipment that had started the project. This allowed the quality assurances to be maintained as outlined in the original contract with the Municipality of North Grenville.

As far as the truck itself is concerned, the final cost of the customized build was approximately $500,000, with an approximate useful life of twenty years. The existing Rescue Pumper had been in service since 1991. The aluminum body was constructed on a Spartan chassis and cab. The 6-person cab and chassis were built exclusively for the fire service industry, in compliance with the National Fire Protection Association standard for automotive fire apparatus. The vehicle is certified to the CAN/ULC S515 standard for automobile firefighting apparatus.

Some of the highlights of the new truck include: a 2700L water tank with 5000L/minute pump, a foam proportioning tank system with a 130L tank, a tighter turning radius than the previous truck, a rear-mounted traffic diversion system, an elevating lighting tower, multiple adjustable shelves and roll out trays, custom hose beds, custom storage compartments, LED warning lights and capacity for six fully equipped firefighters.

According to Chief Okum, the new truck can handle a wider range of emergency situations compared to the old one. Its primary function is for rescue operations, but it can also be used for medical emergencies and fire operations. The water tank isn’t very big compared to other pumpers, but the Chief said that it can start pumping in the event that it arrives at the scene before the pumper, or if the pumper is delayed. It can also deploy a customizable mix of foam and water depending on the needs of the situation.

The transfer of equipment from the old Rescue Pumper was to be finalized following the event so that, if necessary, the new truck could be deployed that night. Everyone in attendance was impressed with the new truck and listened as the many features were described in detail, including air tanks and breathing apparatus that are built into the seats, so that firefighters can be fully equipped getting off the truck instead of getting out and then going to retrieve their air supply equipment. The time saved with this feature could potentially save a life. 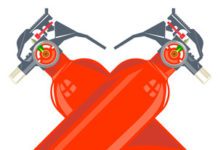 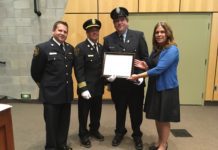