A North Grenville District High School (NGDHS) student represented North Grenville in a country-wide science fair earlier this month and brought back a bronze medal. Thirteen year-old Sophie Healey was the winner of the Grade 7 and 8 Science Fair at NGDHS in March. Her project, studying the way people perceive time, impressed the judges and earned her a spot among 26 other students to enter the Rideau Saint Lawrence Science Fair in Brockville in April. Her project was recognized once again at the regional fair, winning second overall, beating out many older and more experienced students.

Because of her second-place win, Sophie advanced to the Canada Wide Science Fair, held at Carleton University from May 12-18. Over 600 students from across the country were invited to attend and present their projects to judges and the public. “I didn’t know I would be advancing to the nationals,” Sophie says. “It was really awesome when I found out.”
The students invited to the Fair also got to spend the week in university dorms and experience Science, Technology, Engineering and Math (STEM) courses at Carleton University and the University of Ottawa. “It was a really fun experience and I learned a lot from all the other projects,” Sophie says. “It was interesting to see how much kids my age know about different topics.”

Sophie’s project won a bronze medal in her age category, and also a scholarship to Western University, should she choose to go there after she graduates from NGDHS. She says she hopes to compete in the Science Fair next year, and make it to the national competition again. Her interest lies in human psychology and, although she doesn’t know what her next project will be about it, Sophie thinks it will likely be psychological in nature. 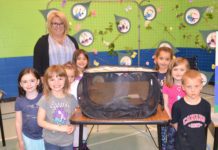