Well, we tried. Over the past few weeks, we’ve been asking the people of North Grenville to tell us how they feel about the proposed prison for Kemptville. In the event, just 214 of you took part, which either means most people don’t care or have an opinion, or that they’re just tired of the whole story. 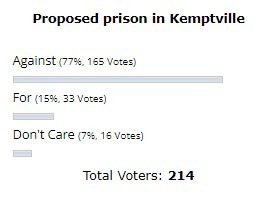 Of the 214 votes, 165 were against the prison (77%), while 33 were in favour of it (15%). 16 people said they just didn’t care one way or another. It was a most unscientific survey, always likely to get opponents involved, rather than supporters, but at least we attempted to get the feeling of the community on the topic, for what it’s worth.