The opening of the new central Library in Kemptville marked a significant point in the history of libraries in North Grenville. These institutions have a long and interesting history. The first known library in North Grenville was actually set up as early as 1832, when Henry Patton, then Anglican Rector in Kemptville, established what was called the “Oxford Library”, a collection of about sixty books. This was neither a public, nor a “popular” library. Thirty-six of the leading men of the region paid subscriptions to become members of the Library, which, according to its constitution, “shall always be kept in the village of Kemptville or its immediate vicinity”.

Kemptville established a Mechanics Institute in 1877. It was located in the old Kemptville Town Hall, and boasted a library of 350 books.

A by-law was passed in 1900 establishing a Public Library in Kemptville, when the books of the Institute were augmented with new purchases, and a library was opened. G. Howard Ferguson, Reeve of Kemptville at the time, was instrumental in this move and served as the first chair of the Library Board. The first location for the Library was the McGee property on Prescott Street, at the corner of Reuben Street, later the Bank of Ottawa building, and then the site of the old Post Office. It was moved to the Fraser Block on the corner of Clothier and Prescott Street around 1910, but then was moved in 1913 to the Carnegie Library on Prescott Street, where it remained until the new Library opened in 2011. The Carnegie Foundation provided a grant of $3,000 on condition that the community provide the site and the corporation provide 10% of the amount annually. The building was erected in 1912. The timing was fortunate, as the Fraser Building and all its contents burned to the ground in the early 1920’s.

The Carnegie Library served the people of the area until 2011, when the new Norenberg building was officially opened on the corner of Prescott and Water Streets in Kemptville. The new central Library was the achievement of some very dedicated residents and book lovers in the community and is now the hub for so many activities, from children’s programs to knitting circles, book readings, Youngsters of Yore, and a host of other community-centred events.

Around the same time the new Public Library was established in Kemptville in 1900, a resident of Burritt’s Rapids, Mrs. Elva Ferguson, started a lending library out of her home, using her own collection of books, augmented with those of some friends. The library continued to serve the people of the village for almost sixty years. Elva charged a small fee for the service, but found it difficult to collect fees and overdue fines. When she and her family moved to North Augusta, she simply packed up her library and took it with her. She offered to return the books to Burritts Rapids when the fees were paid up, but it was not until 1965 that her collection returned when she left it to the Burritt’s Rapids Women’s Institute in her will.

The WI established a library in the Community Hall, under the stewardship of Ann Honsl in 1966, augmenting Elva Ferguson’s books with thousands more donated by individuals and other libraries. This was still a volunteer operation, and a membership fee of $1 per year raised the funds needed to keep the library operating. The library became a formal Public Library in 1969 and funds were received to renovate the basement of the Community Hall as a repository for the collection. The Library moved to its present location at the Bridgemaster’s House in 1982.

Located beside the swing bridge and once the home of the bridge master, this building was built around 1920, and has been rented from Parks Canada since 1982. It is the only one of the Municipality’s branch libraries to continue functioning after the opening of the new central Library in Kemptville. The location, in a building rich with history, is a link to the original libraries established to provide residents with a supply of good reading material, the promotion of literacy, and a social outlet where neighbours gathered to share the news of the day. From the Bridgemaster’s House to the five year-old central library, the entire story of the libraries of North Grenville are told in these two buildings. 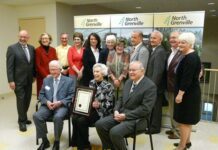 It takes a community to raise a Library: The Norenberg Building’s 10th Anniversary