Robert notes that most of the men who lost their lives were unmarried with no children and don’t have any descendants to help preserve their memory. “I feel like an adoptive child of theirs’” he says. With new documents that they have recently gained access to, the researchers were able to learn more than ever about these men. The goal of the website is to have something the public can access easily to learn about the young soldiers from Merrickville who fought and died for their country.

Robert says it is also important to realize how much of an impact WW1 had on Merrickville and the surrounding area. The loss of a generation of men in the early 1900s stunted the growth of many small towns in Eastern Ontario, which had been growing when war broke out in 1914. “I’ve researched over 350 veterans in Lanark County,” Robert says, “there is almost always a link between these small towns and a man who fought and died in WW1.”

The Merrickville Legion will be holding a launch party for the website on Saturday, August 25, at 10:00am. Councillor Victor Suthren will be on hand to represent the Village, and there will be a talk about some of the men whose stories are being told online. The website is now live and can be found at www.merrickvillesheroes.weebly.com. 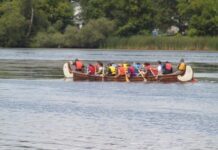