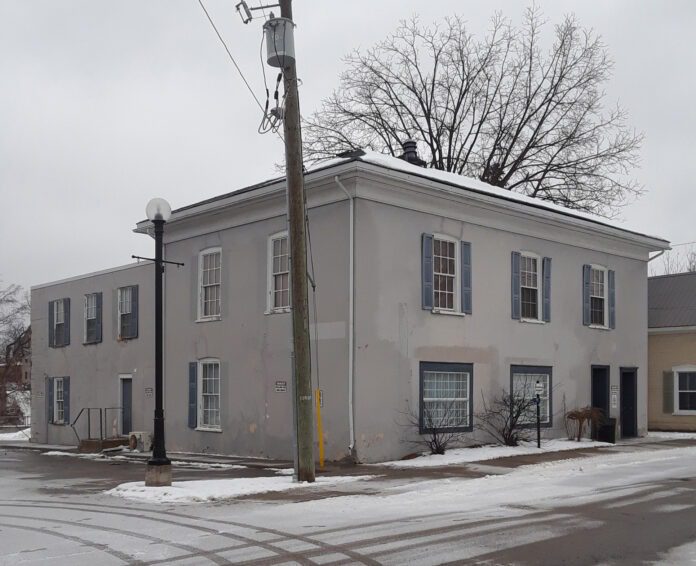 The old Kemptville Town Hall on Water Street, also known as the Courthouse, is being leased to the United Counties of Leeds & Grenville [UCLG] to be the location of nine new affordable housing apartments. The lease arrangement has been negotiated over the past few months, and involves the UCLG allocating $1.3 million to fund the alterations to the historic building. The financing comes from the Social Services Relief Fund, and the project was approved by the UCLG in November, 2021.

The renovations to the building are expected to begin soon, and the lease agreement means that the municipality will maintain ownership of the old Town Hall for the life of the lease. The project is a response to the already serious housing crisis which exists in North Grenville. There have been many examples of individuals and even families being evicted from their rental accommodations when a landlord decided to sell the property, or move family members in instead of the tenants. Some of these evicted residents have been forced to leave the municipality because they couldn’t find suitable and reasonably priced housing in North Grenville.

In 2020, a Task Force on Affordable Housing, established by Mayor Peckford, reported on the situation facing tenants and outlined a series of measures to support affordable housing, including funding partnerships with the Counties and province, changes to zoning and the Official Plan allowing for additional residence in accessory buildings and increased density for more townhouses, and requiring developers to include low-cost housing as part of new projects.

The problem has been exacerbated by many years of rising land prices, and the belief among former councils that North Grenville had to “grow or die”, as one former mayor put it. This led to official encouragement of large scale residential developments, particularly in the Kemptville urban area. The municipality is one of the fastest growing in the province, and demand for housing has been increasing exponentially, with a similarly rising cost for the new homes. Rental accommodation, which has never been plentiful and often sub-standard, has failed to keep up with the needs of the population.

In announcing the Town Hall project, Mayor Peckford underlined the issue: “We have a housing crisis in North Grenville. I regularly get calls from people saying they are getting evicted and don’t know where to go. These are families, seniors, and other residents who, in the face of an increasing shortage of rental options here, are being forced to relocate outside of the community”.

The building has been the home of the North Grenville Society’s Archives for over a decade, and the news of the lease arrangement came as a shock to the Society’s Board when it was first informed, unofficially, of the proposed lease deal. The job of packing and transporting the contents of the archives to a new location will be extremely disruptive to the work and activities of the Society, and the municipality has committed to covering the cost of the move, as well as paying rent on as new location for a period of five years. This, it is hoped, will allow the Society time to find new fund raising options that will eventually allow it to pay the commercial rates on their new headquarters.

A location has been found by municipal staff at 148B Prescott Street, although the property is smaller than the Town Hall, and will require some adjustment by the Society in the way they house the archives. However, there was no alternative for the Society, once word was received that the lease arrangement with the UCLG was a done deal.

Officially, the Society has expressed its understanding of the need for affordable housing, and is at least grateful that the historic building will be preserved, when former councils had threatened to demolish it completely. In 1873, the Corporation of the Town of Kemptville bought a parcel of land on South Water Street from the McIntyres, Helen Scott, and Ambrose Clothier, on which they built a new Town Hall for Kemptville. Over the years, the building contained an upstairs Court House, and offices of various Town departments.

Council meetings were held here until after amalgamation in 1998, when the Municipal Offices moved to the new Municipal Centre. The Fire Department occupied part of this building from about 1881, and renovations were made to accommodate the fire trucks. There was a special fire dock on the river. The Fire Department moved to the old Armoury building in 1968. A tall tower for hanging fire hoses up to dry was a landmark of the Town until it was damaged by fire in 1935, and later demolished in 1957. In front of the building were the Municipal Scales, on which were weighed wagons and goods. This was the official weigh station when goods such as hay were being bought. The town charged a fee for this service. In 1937, an extension to the building was erected at the rear to house the new Kemptville Hydro Electric Commission.

The Town Hall was a meeting place for various societies and organisations in Kemptville, and was the location for concerts and practice sessions for the Kemptville Band over the decades. It is a shame that the housing situation has become so serious that heritage has to take a back seat. But the needs are great, and sacrifices have to be made. And this, too, will become part of North Grenville’s history for future generations.