The long-running saga of the County Road 43 expansion has a new development this week. The plans to expand the road from the 416 to Somerville Road by making it a four-lane highway have been ready for four years now, but the lack of funding from the Province of Ontario has prevented the work being done. In the meantime, traffic on that stretch of road has increased significantly, and is only going to get worse as various residential developments are completed.

The public are invited to add their names to the petition. Copies can be signed at the Municipal Centre in Kemptville, as well as at a number of local businesses. Residents can also download the petition on-line at Steve Clark’s website: www.steveclarkmpp.com. The petitions will be available for signing throughout the summer months, before being gathered and presented in the Ontario Legislative Assembly in September.

While launching the petition last Friday, the MPP noted: “This project is shovel-ready and has been identified as the top infrastructure priority for North Grenville and the United Counties of Leeds and Grenville for over five years,” said Clark. “Expanding County Road 43 is essential for public safety and future economic growth and we’re tired of being ignored by the province. North Grenville is one of the fastest-growing areas in Eastern Ontario and relieving congestion on this critical connecting link to Highway 416 is vital to the economy in our region.”

The municipality and United Counties have been prepared to start the expansion project, but the province has rejected their applications for infrastructure funds on a number of occasions. The argument used was that North Grenville was prosperous and other municipalities needed the funding more. To support this, Ontario pointed to the fact that municipal taxes here had not been raised for a number of years. However, the 6.18% increase in taxes two years ago contradicted that. Nevertheless, no funding has been approved for the expansion project since then.

It will be remembered that Steve Clark was involved in the petition protesting the closure of the Service Ontario office in Kemptville, and that initiative reversed the province’s decision. He is hoping that this petition, too, will get through to the government at Queen’s Park and stir them into life. The more signatures on the petition, the stronger the case will be.

“Having thousands of signatures supporting the expansion of County Road 43 will definitely get Premier Wynne’s attention.”

The petition reads as follows:

“WHEREAS County Road 43 is a critical link between the Town of Kemptville and Highway 416;
WHEREAS the Municipality of North Grenville is one of the fastest-growing communities in Eastern Ontario and expanding County Road 43 to four lanes is essential to support current and future economic development and residential growth;
WHEREAS up to 18,500 vehicles per day travel the two-lane roadway, creating congestion and, increasingly, putting the safety of motorists, cyclists and pedestrians at risk;
WHEREAS the Municipality of North Grenville and United Counties of Leeds and Grenville have for several years identified the County Road 43 expansion as a priority and have completed the environmental assessment and design, making the project shovel-ready;
WHEREAS during this time, North Grenville and the United Counties have made repeated requests to several ministers and senior government officials for provincial funding to offset the $25-$30 million cost of the expansion;
And WHEREAS, although the Ontario government is aware the expansion is not feasible without its support, funding criteria for provincial infrastructure programs has excluded the project for the past five years.
Therefore, WE THE UNDERSIGNED, petition the Legislative Assembly of Ontario as follows:
Make the County Road 43 expansion project eligible for provincial infrastructure programs and immediately provide funding so work on this important project to enhance public safety and support economic growth can finally begin.” 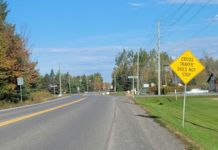 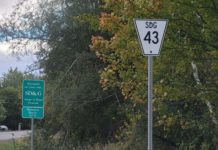 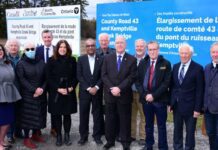