A local author has released a new book telling the little-known story of Canada’s role supplying Chinese labourers to Northern France during the First World War. Dan Black’s book, “Harry Livingstone’s Forgotten Men”, follows a small town doctor from Listowel, Ontario, Captain Harry Livingstone, as he embarks on a journey to help recruit men from China into the war effort: what would later be known as the Chinese Labour Corps (CLC).

In 1917, the British were in desperate need of labourers who would perform support work and manual labour on the front line, digging trenches, hauling supplies, repairing vehicles and cleaning up war-torn battlefields. Looking for a well-paying job, Chinese men signed up to help in the war effort as a way to support their families in China. Many were migrant labourers and were used to being away from their families for months at a time.

As a doctor with the Canadian Army Medical Corps, Harry Livingstone was sent to a recruitment camp in North Eastern China, where he was tasked with inspecting the men who signed up for the Corps, to make sure they were in good enough health to travel and carry out hard manual labour. He then accompanied them on the long trans-Pacific journey to Canada, across the country by train, and on to steam ships that took them to France.

It was a gruelling trip for the Chinese men, and many died on the journey. Bringing Chinese men to Canada, and then transporting them across the country, was both a massive undertaking and a covert operation, with the government fearing the backlash of Canadian citizens, who didn’t think highly of Chinese immigration at the time. The men were not allowed to get off the trains and were tightly guarded throughout the journey. Of the 95,000 Chinese labourers recruited by the British, roughly 85,000 arrived on Canada’s West Coast and nearly 82,000 of them crossed Canada by rail on special trains bound for the East Coast. The French also recruited labourers from China, and thousands more were enrolled by the Russians.

Dan, the former Editor of Legion Magazine and author of two previous books, spent over two years researching the book, travelling from Ottawa to Southern Ontario, to London, England, and all the way to China to find out everything he could about the story of these men who played an important role in the war, specifically during the CLC’s time in France between 1917 and 1920. The book centres primarily on Harry Livingstone, but also touches on several other Canadians who played a role in getting the Chinese labourers across Canada and to France. While his main characters are Canadian, Dan also shines a light on the difficulties the Chinese men faced, largely at the hands of Canadians and their British counterparts.

“I chose to tell the story from Harry’s point of view, but also very much taking into account the Chinese and what they were going through,” Dan says. “It was not a happy ending for many of the Chinese labourers.”

Touched by their story, Dan chose to dedicate the book to three Chinese men who died on the long journey to France. One of whom, Chou Ming Shan, was buried in Petawawa, which was used as a holding point for men on their way across the country. One of the highlights for Dan in working on the book was that he was invited to a ceremony in October, 2019, at Garrison Petawawa, organized by the Commonwealth War Graves Commission to honour Chou Ming Shan and establish a headstone for this man who died more than a hundred years ago of malaria and was buried in an unmarked grave. “I was totally blown away by that, and how this young man was remembered,” Dan says.

Dan is very grateful to the many people who helped him conduct the research that allowed him to write a very detailed account of this overlooked piece of Canadian wartime history. This includes Harry Livingstone’s son, David, of Waterloo, who gave him complete access to his father’s diaries, letters, and photographs from the time. “I was blessed to have some marvellous people across the country and in the U.K. and the Far East who helped with the research,” he says.

The book came out in the Fall and was published by James Lorimer & Company Ltd. of Toronto. Dan will be giving a talk about the book to the Merrickville and District Historical Society at the Legion on Tuesday, February 25, at 7:00 pm. He will be giving a portion of the proceeds of each book sale to local refugee sponsorship group, Rideau Bridge to Canada. He will also be speaking at the Brockville Museum on February 18, as part of its popular lecture series. Dan will be happy to sign copies of the book at both events. Books can also be purchased at Indigo/Chapters, and online through Amazon and the Lorimer publishing website. 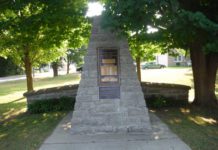