Five short years ago, a group of Kemptville students decided to try out for the newly-minted Mustang Volleyball club program run out of St. Michael Catholic High School. These Grades 7 and 8 girls walked onto the court with curiosity, optimism, and smiles full of braces. Having limited prior knowledge to the sport, they worked relentlessly in their first season to learn the game and develop the necessary skills for competition at the 14U level. Little did they know their decision to try a new sport would lead them all across Canada in their graduating year.

The years flew by and, this past Fall, the Mustang 18U athletes started practicing in September for what would be their final year of Ontario Volleyball Association competition. Over the Thanksgiving weekend, they took a flight to Halifax, Nova Scotia, for their first tournament of the season. The St. Michael students embraced the East Coast tour and battled hard, but still had much to learn. After dipping their toes into the Atlantic Ocean, the Mustangs were taught a lesson about resiliency and perseverance, and gained an understanding that nothing worth winning comes easy.

As the season progressed, the girls’ commitment to improving was evident, as they gave up numerous weekends to participate in tournaments in Peterborough, Oshawa, Mississauga, Ottawa, and Casselman. Each tournament sharpened their skills, and game knowledge was acquired. After winning a local LGSSAA championship for their school team, the Mustang Volleyball team travelled to Deep River, where they captured a regional EOSSAA gold medal and punched their ticket to the OFSAA provincial championship in Windsor, Ontario. After finishing fifth at OFSAA in the girls “A” volleyball division, the athletes turned their focus to the Ontario Volleyball Provincial Championships in Waterloo, Ontario. Backed by an explosive offence and steadily improving defense, the Mustang 18U volleyball team competed admirably all weekend, highlighted by a victory over the Kingston Volleyball High Performance 18U club team.

“As a high school team, competing against an all-star club from Kingston who take the best players from numerous schools in the area, says a lot about the dedication, focus, and drive that our students have here in Kemptville,” explains head coach Angus MacDonald.

After playing together for five years, the girls had mixed emotions about heading off to Edmonton for the 18U National Volleyball Championships on May 19-22. The best teams from all across the country would be travelling there, and to be counted amongst them was an accomplishment for this small town team. However, this year’s championship also meant the end of an era, as six players from the starting line-up would all be graduating and moving on to various post-secondary programs.

On May 19, Day One of competition, the Mustang 18U squad ran into two strong Alberta teams, and ended with a record of one win and two losses. Day Two revealed a different story, as the offensive onslaught overpowered their competition from Alberta, Saskatchewan, and British Columbia, and the Mustangs cruised to three straight victories, which propelled them to the quarter finals.

In the playoffs, the Kemptville squad lost the first set 25-23, and then roared back to win 25-13 in the second set; but went on to lose a heart-breaking third set by a score of 15-13. One loss does not define a team and, despite the unfavourable result, Mustang Volleyball went up against some of the best teams in the country, finished with a winning record of four wins and three losses, and represented the town of Kemptville with pride, determination, and heart.

A big congratulations goes out to the graduating players: Grace Besserer, Megan O’Connell, Tatiana Weissflog, Charlotte Black, Sydney Murray, and Vanessa Huels. Tryouts for the 13U, 14U, and 16U teams will take place in September. Please visit www.minimustangsvolleyball.com for more information. 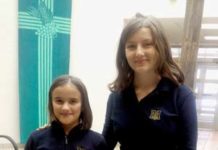