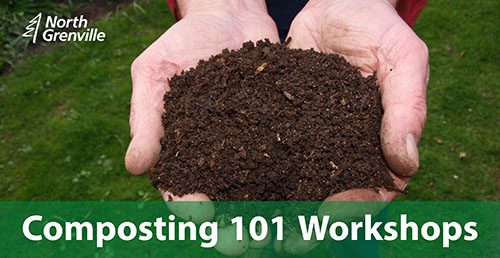 The Municipality of North Grenville is offering free composting workshops, with the promise of a free composter for all attendees. Councillor Kristin Strackerjan says the conversation about waste management began with the survey that the municipality circulated earlier this year. With limits being imposed by the province on organic waste in garbage by 2023, the municipality was looking for community input about how they could deal with organic waste differently.

The idea of having green bin service in the municipality’s urban areas came up, but they have found that it is not the most economical, or environmentally friendly, option. “I proposed to council that we encourage people to do their own backyard composting,” Kristin says.

Council found that one of the most significant barriers for people, when it came to backyard composting, is not knowing how to get started and maintain it in a sustainable way. That’s why they came up with the idea of offering four different Composting 101 Workshops, led by various community members who all have different experiences and information to share when it comes to composting. Kristin approached Bill Langenberg, Denise Mahoney, Diana Steadman and Paul Sharpe to lead workshops, and all agreed to share their expertise with the community free of charge.

Kristin wants to make the workshops as easy to access as possible. Each of the presenters will hold two workshops through the month of June at the Municipal Centre. “We wanted to hold the workshops in the early part of the season to make it easier for people to start on this adventure,” Kristin says.

The only part of the initiative that is costing the municipality money are the free composters they are giving out to residents who participate in the workshops. The composters are already available at the municipality for $45, but council wanted to show how committed they are to encouraging people to compost. The municipality has committed to giving away a maximum of 90 composters to workshop participants, at a cost of $4,050. Kristin believes this cost will likely be absorbed into the budget for Public Works. Those who sign up for the free composters will have it delivered to their house, and will be asked to participate in a waste audit study, to see if composting makes a difference in the amount and type of garbage they throw out. “This will help inform future waste management contracts,” Kristin says.

Over 50 per cent of garbage, by weight, is organic and a large portion of that is compostable. Although it does decompose in the landfill, it produces methane gas, which is detrimental to the environment. Kristin and her family of five only put out one bag of garbage every two weeks, and that is due in large part to their efforts to compost plant-based waste at home. She says composting has the ability to save individual households and the municipality money in the long-term.

Kristin has already had a lot of people email her, interested in signing up for the workshops. People are generally interested in how to compost effectively. “There is going to be a huge culture shift over the next few years, and this is just a small part of that,” she says.

To learn more about the different workshops available and sign up, email Kristin at  [email protected]on.ca