You may have read elsewhere about the changes made by the Municipal Council to the proposed annual budget for the Kemptville Business Improvement Area [BIA].

Unfortunately, these reports have failed to disclose the actual context and content of the situation. In effect, an attack was launched by members of council on the BIA Board, and, in particular, on John Barclay, their Executive Director. In what has been called an “unprecedented” move, council cut the BIA budget, ending a successful business attraction project, the Pop-up Shops, and reducing the Executive Director’s salary to a minimum wage position.

This attack on the BIA and its reputation was both unwarranted and politically-motivated, as the focus on John Barclay cannot be separated from the knowledge that he is due to run for a position on Council in October’s election. The insinuations put forward by Barb Tobin, Frank Onasanya and David Gordon, that somehow John Barclay’s company had been improperly taking an unfair share of the BIA budget was both crass and inaccurate, and only served to make them look petty and vindictive.

On May 7, during the Committee of the Whole meeting, the Chair and Treasurer of the BIA presented their annual budget to Council. Because of municipal timing, an audited copy of the budget was only available that day, and the named councillors jumped on what they claimed were inaccuracies and suspicious data in the submission, arguing that the BIA had been irresponsible in their finances. In fact, much of what they were asserting was itself inaccurate and rather self-serving. For example, they claimed that the management fees, paid to John Barclay’s company, had risen between 2016 and 2017 from $15,000 to $21,866. In fact, the rise was much less than that, as the 2016 amount was for 9 months and that of 2017 was for 12 months. This fact was ignored by Tobin, Gordon and Onasanya. The budget for 2018 allowed for Management fees of $20,500.

This did not stop Tobin from commenting on the fees paid to Triune (John Barclay’s company), which she described as “quite hefty”, and went on to say: “There’s not a member of council sitting here at this table that makes that money, so it’s just interesting”. What does she mean, “interesting”? That’s quite the innuendo. Note that Tobin was paid $20,655.83 as a Councillor in 2017, and that is also “interesting”, as she says. It is highly unprofessional, unethical and lacking in character to throw those innuendos into an official meeting, specially when they are based on, let’s say, inaccuracies.

Behind all of their claims against the BIA, council refused to make the point that paying an Executive Director, who is responsible for promoting the economic development of the downtown area, at the rate of $20 an hour was hardly a competitive wage. Deciding to reduce the position to a minimum wage job is not going to help in that work, or to attract more qualified people to the position. It seemed that they were saying that the economic future of downtown Kemptville was not worth a proper salary for a well-qualified and hard-working Director.

The cancellation of the Pop-up program was also unexpected, as it had seemed from their personal participation in opening these stores that David Gordon and members of Council fully appreciated what they meant to the economic life of Kemptville. Cutting the funding of this program was a complete surprise to the BIA Board, as it was one of the more successful projects that had been undertaken under the direction of John Barclay, and the sudden change in the budget leaves the entire project without life support.

Council, on May 7, instructed municipal staff to prepare an administrative report on the BIA, which certainly seemed to be an unwelcome and vague directive, given the response of CAO, Brian Carré. He asked for clarification of what, precisely, council were asking from staff. The resulting report, prepared by Director of Planning Phil Gerard, was clearly a rushed job, as it contained a number of inaccuracies and incorrect statistics, which the BIA Board attempted to correct before the Council meeting on May 14. However, in a surprising and unprecedented move, Council voted through the changes to the BIA budget.

The BIA Board have been stunned, and quite insulted, by the clear attack on their professionalism and management of BIA funds, and John Barclay has been tainted with a clearly unfair insinuation that he is has been improperly profiting from his work with the BIA, something which the Board has been very quick to deny.

The basic fact is that the BIA is not sufficiently supported by the municipality to do the kind of work expected of them. In order to have a proper level of expertise in the position of Executive Director, too much of their meagre funding has to be used to fund that position. Council’s decision to cut their budget even further only makes their situation worse, and undermines all the good work they have been doing to promote the commercial future of downtown Kemptville. The reverberations of these actions will be felt for a long time. North Grenville deserves better than this. 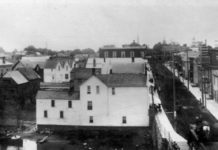