A local apple orchard has made a grand gesture to help bring attention to a family’s memorial hockey fund set up in memory of a lost loved one. Phil and Shelly Lyall of Mountain Orchards were eager to implement the idea of dedicating their yearly corn maze to Marty Brayman, a North Grenville native and Master Corporal in the Canadian Armed Forces who was tragically killed in September of 2019. Marty was loved by many and made friends wherever he went.

The Marty Brayman Kids Hockey Fund was set up by his family and friends shortly after his passing. Hockey was very important to Marty, who played in Kemptville from a young age, eventually playing on the Kemptville 73’s team and even continuing to play after joining the military. The Hockey Fund raised so much money in its first year alone that it allowed three kids to be sponsored. The goal of the Fund is to stick with the kids who are sponsored, making them feel supported in their dream of playing hockey over the span of several years.

“For us, I think it’s psychologically really important for kids to know they have some support and that it’s not just going to end,” said Marty’s father, Joel, in a 2020 interview. “Marty played it for so long, and it was such a huge part of his life, we wanted to make sure we had that sort of longer-term view of how this would work.”

The Fund is still going strong, though much has happened in the world since it was first created. “Since we began the Hockey Fund, the world has been in chaos living through COVID and our fundraising dwindled as hockey was on and off multiple times,” Joel said. “We continued to sponsor kids throughout the pandemic with the funds that had been initially raised. We are now sponsoring boys and girls who play hockey in town and have once again looked to raise funds to support them. We give a tremendous amount of credit to Mountain Orchards for re-inspiring us through the creation of the corn maze. Nothing can beat tight knit communities that support each other through thick and thin.”

Phil Lyall is the one who designed and cut the corn maze. He described the initiative as a “group decision”, being already somewhat familiar with the Brayman family. Mountain Orchards raises money for a different cause each year through their unique corn mazes. A donation box is set up to collect funds from those exploring the maze, with the funds being donated to the specific cause that inspired that year’s maze design. The funds raised this year for the Marty Brayman Kids Hockey Fund are not yet counted, but Phil said that at first glance it looks like a “tidy sum”.

The quality of the corn maze is astounding to behold. Phil cuts the maze himself with his tractor when the corn is only 6 inches tall, first measuring out the design and using block lettering. A drone is then used to photograph the maze to help promote the cause.

To learn more about the Marty Brayman Kids Hockey Fund or to make a donation, visit https://martybraymanhockeyfund.com/. 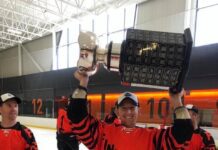