On Friday, February 1, 2019, a long-time resident of Merrickville-Wolford was awarded the Order of Canada for his over 50-year career studying Canada’s amphibians and reptiles. Francis R. Cook was born in Nova Scotia, and discovered his interest in herpetology (the study of reptiles and amphibians) at an early age. It was a visit to the Royal Ontario Museum at ten-years old that solidified his decision to dedicate his career to studying these creatures that often get overlooked. After receiving his Bachelor’s and Master’s degrees from Acadia University, Francis was lucky enough to land a coveted position as one of the curators in the Zoology section of the Museum of Nature in Ottawa. Throughout his 32-year career at the museum (interrupted only briefly to pursue a PhD at the University of Manitoba), he was also the Editor of the scientific journal the Canadian Field Naturalist.

Francis says that, when he heard he was receiving the Order of Canada, in June 2018, he was stunned. “It was the last thing I would have thought,” he said.

The ceremony at the Governor General’s residence at the beginning of February was a ceremonial event with “all the trappings,” he says. After a quick introduction, which outlined Francis’ notable contributions as a renowned scientist and researcher in the field of herpetology, the Order of Canada medal was pinned on his jacket by Her Excellency the Right Honourable Julie Payette, Governor General of Canada, herself. “She was very courteous and very nice,” he says. “It was awesome to be with all the other people getting the award who have done so much for Canada.”

Francis was joined at the ceremony by his wife, Joyce, children and grandchildren, who are all very proud of his accomplishments. Francis says he is very thankful for all the people who showed an interest in his work and backed up his nomination for the award. He also credits Joyce for her unwavering support of him and his research over the years. “Without her, I probably would have run amok,” he says.

Francis is adamant that this award is not only a win for him, but also for the field of herpetology as a whole. “The thing to stress is that this award has been given to a person who has dedicated their life to studying Canadian fauna,” he says, adding that it has never been more critical to observe a baseline for these animals in a time when climate change is an increasing threat. “I hope this award will encourage people to keep on track with studying these creatures.” 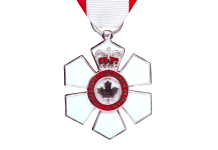 Local Scientist given one of Canada’s highest honours