A Merrickville resident is one of the very few people in the country currently playing the bells, called the carillon, on Parliament Hill. Wendy Stokes-Earl first heard the magical sound of the carillon in 2003 when she was on a vacation with her husband in Florida. They were at the Bok Sanctuary Garden on Martin Luther King Day, and the air was filled with the bells of their carillon, playing everything from gospel music to blues and jazz. “It was magnificent,” Wendy remembers.

The carillon is the world’s largest instrument. It originated in Belgium over 500 years ago and is defined as a collection of at least 23 finely-tuned bronze bells mechanically attached to a keyboard. Ottawa’s carillon in the Peace Tower on Parliament Hill was inaugurated on July 1, 1927, during the celebration of the sixtieth anniversary of Confederation. It is one of the largest carillons in the world, with 53 bronze bells. The largest bell weighs over 10,000 kilograms. It is also one of the busiest carillons in the world, playing over 200 concerts a year. From September to June, Ottawa’s carillon can be heard from 12:00-12:15 daily, and in July and August the concert lasts for an hour, from 11:00-12:00.

It wasn’t until several years after she first heard the carillon that Wendy was reminded of the instrument while watching the Rick Mercer report from her home in Merrickville. Rick Mercer was being taught to play the Peace Tower’s carillon by Canada’s Dominion Carillonneur, Dr. Andrea McCready. Wendy was thrilled to learn that there was a professional carillonneur so close to home. She quickly found Andrea’s contact information on the government’s website and sent her an email asking whether she would be interested in having a “rather senior student.”

It was through Andrea that Wendy learned about a certificate program at Carleton University that trains carillonneurs. The program was started by Dr. McCready, and a music professor at Carleton, James Wright, in 2011 and offers both a two year certificate in the carillon and a three year bachelor of music in the carillon. “It is the only university in the country that offers this program,” Wendy says.

Now in her last semester of the certificate program, Wendy has had the opportunity to play the carillon on Parliament Hill for an hour every week for four semesters. “When I come out on Thursday afternoons, the guards always say that it was lovely,” she says smiling.

A veteran organist, Wendy was hoping that her background would help with mastering the carillon, but found that there were some significant and very challenging differences. “The foot pedals are different, and it takes a lot more effort to get the bells to play,” she says. Not surprising, considering the size of some of the largest bells.

Wendy’s favourite song that she has played at Parliament Hill is the Newfoundland folk song “Let Me Fish Off Cape St. Mary’s,” while she finds playing Canada’s national anthem extremely intimidating. “You can’t make a mistake in O’Canada,” she says.

Wendy says having the opportunity to learn the carillon and play on Parliament Hill has been amazing. “It is a blessing, and I can’t say enough about the experience,” she says. “It’s such a little slice of history.” 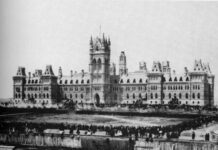