Merrickville-Wolford Fire Chief, Mark Urquhart, handed in his resignation last week after a very successful two years in the position. Mark joined the Merrickville Fire Department as a volunteer fire fighter in 2011, quickly advancing into the role of Lieutenant, and then on to become Fire Chief in April, 2017.

Mark says the past few years have been a humbling experience, witnessing the commitment and passion of the volunteer fire fighters to their community. “As volunteers, all of our members go above and beyond with additional volunteer activities,” he says. “It’s volunteering above volunteering.”

The Merrickville Firefighters Association raised $14,000 to purchase a new ATV and medical skid unit to help with off-road rescues and emergencies. The department was also able to secure $19,000 worth of funding in private donations from Enbridge Gas, CP Rail, IBM, and Trans Northern Pipeline.

In 2017, the department welcomed their new pumper tanker, with a capacity of 2500 gallons of water. The truck replaced two older tankers and Mark says his predecessor, Bob Foster, was instrumental in its design and acquisition.

The department has also seen some improvement to their managerial organization over the past two years, with the addition of Deputy Chief Brad Cole and three new Lieutenants. Mark ensured that his team’s training was up to National Fire Protection Association (NFPA) standards, and worked hard to improve the resources of the Merrickville Fire Department in the service of Merrickville-Wolford’s citizens and visitors.

Mark is very proud of the Merrickville Fire Department’s highly trained and dedicated team. In 2018, they became the only fire department in Leeds-Grenville to have all their officers receive their Incident Safety Officer (ISO) certification. The certification is focused on training fire fighters to recognize the hazards related to fire fighting and how to ensure both their own safety and the safety of citizens during incidents.

Mark’s departure from the Merrickville Fire Department is solely due to his need to accept a full-time job elsewhere. The position of Fire Chief in Merrickville-Wolford is currently only part-time, although it does involve a 24/7, 365 days-a-year commitment. Deputy Fire Chief, Brad Cole, will be stepping into the role of acting Fire Chief as of January 25, and, according to a press release from the Village, there will be a posting to fill the position in the near future. “The Village of Merrickville-Wolford would like to extend its sincere appreciation to Chief Urquhart for his 8 years of service to the Merrickville-Fire Department, including almost two years in the Fire Chief position,” the press release says. “We would like to wish Chief Urquhart the very best in his future endeavours.” 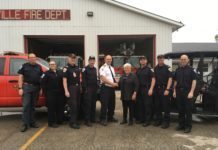