Harry McLean’s Pub at the Baldachin Inn was buzzing on Tuesday evening, at a celebration of the Merrickville Car Show’s 17-year run. The organizing committee held the event to thank all the businesses and individuals who have volunteered and sponsored the event over the years.

The show has brought thousands of people to the community, and played a role in getting Merrickville on the map. “Seventeen years ago, a few people had the idea to get together and have a little fun,” said Doug Struthers, a member of the organizing committee. “On a really good day, we had 1,500 cars and over 8,000 people [visiting the show]”.

Many people were recognized for their contribution to the event, including Bruce Stackhouse, the man credited with organizing the first car show in 2000. Mike and Vicky Ogilvie from Ogilvie’s Auto and Fleet Services in Kilmarnock where mentioned, as they have been title sponsors of the event since the beginning. “It’s been a quick 17 years,” Mike says. Hugh Colton was also given an honourable mention as one of the event’s founding fathers.

Doug says there is no way the car show could have continued without its dedicated volunteers, who stuck with them through thick and thin. He estimates that local people have put 8,500 hours of volunteering into the show since its inception.
As a way of giving back, the organizing committee decided to donate the leftover money from the event back into the community, and handed out cheques to all the local charities who played a role in the car show over the years, including: the Merrickville Soccer Club, Rideau Search and Rescue, Merrickville Day Nursery, I am Alive, Saint Ann Roman Catholic Church, and the Merrickville Fire Department.

Letter to the editor – thank you 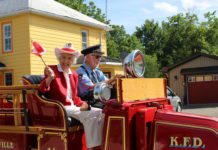 Thank you for another successful Canada Day Parade 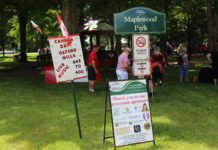