Merrickville-Wolford council passed a resolution at the last council meeting to allow the Mayor to become a voting member on the municipality’s Committee of Adjustment. The committee is an independent decision making group, appointed by council and established under the Planning Act of Ontario, to make decisions regarding variances from any of the municipality’s zoning by-laws. According to the Planning Act, there must be at least three members sitting on the Committee of Adjustment. The staff report outlined that Lorne Walker, Denis Schryburt, and Colin Hurman were appointed to the committee of adjustment on July 22, 2019. On September 9, 2019, Councillor Timothy Molloy was also appointed to the committee. Denis and Colin are no longer on the committee, leaving Lorne and Councillor Molloy as the only members.

After some discussion in an in-camera session, council passed a resolution to amend the Village’s procedural by-law to allow Mayor Struthers to sit as a voting member of the committee until the end of the year. The bylaw amendment will be in place until the first meeting of council in January 2021. Mayor Struthers says that, although applications for minor variances are rare, they need to have the committee in place, just in case one does pop up. “This would satisfy that right away,” he says. “Hopefully, between now and then, we will be able to populate it with members of the public.”

The only council member to vote against the motion was Deputy Mayor Michael Cameron, who believes that turning the responsibilities of the Committee of Adjustment over to council, for the time being, would have been the more open and transparent decision. He also said it would make sure that the committee always had quorum, as it would be made up of all of council, instead of just three people.

“The Mayor has been taking more and more control, and that’s not the way it should happen,” he said.

If the municipality has not received any applications to fill the vacancy by the end of the year, council will discuss dissolving the committee and having council take on the responsibilities of the Committee of Adjustment until the end of the current term. That being said, all council members are hoping that they will be able to recruit volunteers, so that they can have a committee that is populated by the public. “The majority view of council is to have a Committee of Adjustment 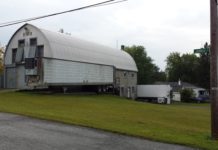 The honey house is growing