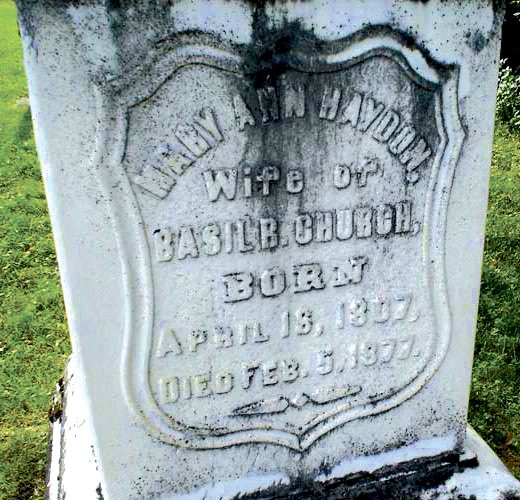 In mid-19th century Merrickville, Upper Canada, Mary Ann Hayden Church spoke as a confident voice of Universalism. In 1838, she was recognized as a preacher in the newly formed Universalist Society in Upper Canada, and the first woman among more than 400 male in North America.

Rev. Dr. Heather Fraser Fawcett will make a presentation on Mary Ann Church to the Merrickville and District Historical Society Tuesday, May 30 at 7 pm in the Royal Canadian Legion in Merrickville. “Mary Ann Hayden Church brought Universalism to flower in Johnstown District with the zeal of a convert, with her experience as a long-time preacher, and with her understanding of family and community,” according to Rev. Dr. Heather Fraser Fawcett.

Locally from the mid-1830s thru the 1860s, Universalism was in its prime, but by the 1890s Universalists had all but disappeared as other faiths softened their theology, and as the original Universalists moved or died. Through the early decades of Merrickville, they stood as an alternative faith believing in a loving God and in Universal Salvation.

The 26-year-old Mary Ann met Dr. Basil Church in the spring of 1833 in Brattleboro, Vermont while she led a group from Nova Scotia undertaking a Methodist Revival. Basil married Mary Ann Hayden Church in Brockville, July, 1834. They took up residence in what she referred to as Hybia Cottage. The frame house was briefly the home of one of Colonel By’s engineers, Edward Charles Frome during the construction of the Rideau Canal locks.

She was increasingly feisty and confident in the defence of her faith until her health began to decline in the 1850s. In his 1851 visit to Merrickville, J.W. Bailey, a Universalist from Madrid, New York noted, “Mrs. Church is so out of health that she has abandoned her public labors, and for the most part of the time, keeps her room…She is a very intelligent and interesting lady – is largely imbued with the spirit of the Gospel – her whole soul seems to be electrified by the truth – and she expresses a confident hope that she shall preach again before she dies. God grant that it may be realized.”

In 1807 Mary Ann Church was born in Cornwall UK. On her death in Merrickville, in 1877 she was interred in the Union Cemetery.