by Gary Boyle,
The Backyard Astronomer

Eclipses are awe-inspiring sights that must be seen firsthand. In the early morning hours of May 26, the Full Flower Moon will pass into the earth’s shadow of the first of two lunar eclipses seen this year. North America is poised to see a varying portion of the May 26 eclipse depending on where you live except for the Maritimes, Quebec as well as eastern and half of northern Ontario where the moon will have set before the eclipse begins.

Eclipses occur as the sun, earth and moon are geometrically lined up, but this does not occur every month because of the moon’s slightly tilted orbit as it circles the earth. However, a few times a year this lineup rewards us with an eclipse. 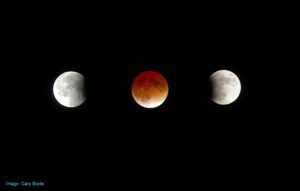 As the moon continues to slip into the earth’s large, dark shadow, it takes on a burnt orange or copper colour which is very evident during mid-eclipse called totality. Commonly referred to as the “blood moon”, people of antiquity saw this as a bad omen of a coming apocalypse or some religious meaning. Lunar eclipses are very safe to observe and photograph. This dramatic colour change on the lunar surface is the result of sunlight refracting through the earth’s atmosphere much as we see during nightly sunsets. If you were on the moon during totality, you would see a beautiful thin orange layer of the earth’s atmosphere and witness every sunset on the left half the earth and every sunrise on the right half at the same time. The next lunar eclipse will occur later this year on November 19 and will be seen from most of Canada in its entirety.

Two weeks after the lunar eclipse on June 10, there will be a spectacular sunrise partial solar eclipse observed primarily from the upper eastern part of the continent. This is where precautions must be taken to prevent eye injury or even blindness. If the morning is clear those with solar filters will see the eclipse through distant trees and buildings which will make for a fantastic photo op.

Never look at the sun without a proper filter. Sunglasses are not designed to look directly at the sun. A few safe ways to observe this event is using a piece of #14 welder’s glass (only number 14). Contact online reputable telescope dealers to purchase specialized eclipse glasses. Remember to place the filter in front of the telescope, binoculars or camera lens thus reducing the damaging light by more than 99% before it is magnified. If you cannot find a solar filter, use a safe projection system. Project the sun’s image through a spaghetti strainer a few inches away from the side of a building or sheet of paper and safely look at the small “happy faces” projected. This avoids looking at the sun. Anything with a small hole, even a Ritz Cracker will do the trick.

Eastern Time
The partial umbral eclipse begins at 5:44 a.m. Moon already below the horizon for most locations.

Known as “The Backyard Astronomer”, Gary Boyle is an astronomy educator, guest speaker and monthly columnist for the Royal Astronomical Society of Canada. He has been interviewed on more than 50 Canadian radio stations as well as television across Canada and the US. In recognition of his public outreach in astronomy, the International Astronomical Union has honoured him with the naming of Asteroid (22406) Garyboyle. Follow him on Twitter: @astroeducator or his website: www.wondersofastronomy.com 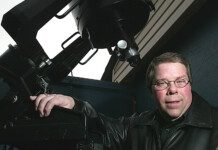 Stargazing – A Way To De-stress