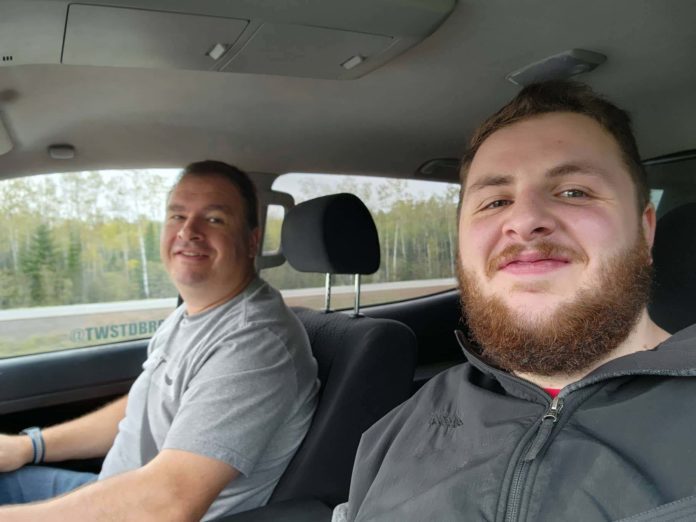 Hello! I’m Connor Mockett, a storm chaser and photographer based out of Winchester, Ontario, and I went to Nova Scotia to get hit by Hurricane Fiona. On purpose.

My storm chasing partner, Tom Smetana, picked me up in Winchester late in the afternoon of Thursday, September 22 to start Day 1 of traveling towards our destination province of Nova Scotia. After a 7.5 hour drive on Day 1, we stopped in Edmunston, New Brunswick, and got a hotel for the night. Due to the excitement we were both feeling and ideas of where our final destination would be for the chase, we only got about 4 hours of sleep.

The next morning, Friday, September 23, after a quick stop at the grocery store for some food in case we were to get stranded somewhere, we got back on the road at around 8:45 am. Throughout the drive towards Nova Scotia, we contemplated back and forth about if we wanted to risk crossing the Canso Causeway, which is the only road that connects the mainland to Cape Breton. We ultimately decided to stay on the mainland side, as we weren’t sure if the Causeway would get closed for numerous days, which we personally couldn’t risk. With that in mind, we started to scout out areas on Google Maps to get an idea for where on the mainland we were going to ride the storm out.

In the afternoon of Friday, we decided that we were going to get hit by Hurricane Fiona right at the Canso Causeway, and in a little town nearby called Mulgrave. But first, we needed to find a hotel to sleep in before our chase started on Saturday morning. After having a tough time finding a hotel with available rooms, we found a spot in Antigonish, Nova Scotia, about a 40 minute drive from our chasing target at the Canso Causeway. With a forecasted landfall of 9 am, our plan was simple: get another 4 or 5 hours of sleep, hit the road at 2 am, and chase the rest of the night and through the morning.

That’s not at all what happened.

As I’m sleeping, my chasing partner, Tom, knocks a couple times on my bedroom door and says “we’ve gotta go”! Confused, I ask “why?”, and then look at radar on my phone. The storm’s landfall was going to be about 5 hours early due to an upper trough in the atmosphere slingshotting the storm super fast, straight at Nova Scotia. And after 2 hours of sleep for myself and 0 hours for Tom, we were out the door to chase Hurricane Fiona at 10:30 pm on Friday night.

Once we got on the Highway to get to the Canso Causeway, the wind was at about 100km/h, and the rain was like someone was standing on top of our truck, dumping buckets of water on us. Trees were being shredded around us. Wind was rocking the truck. Visibility was very low. It was an intense drive, but the adrenaline was flowing and both Tom and I were loving it.

Once we got to the Causeway and Mulgrave, winds were sustained at about 70km/h, with gusts up to 110km/h for most of the night. Storm surge wasn’t much of a problem where we were in Mulgrave and around the Causeway, as the water only came up 3 to 5 feet. Unfortunately, combined with rain waters causing the storm drains to not be able to keep up, water did surround a home in Mulgrave and put a couple streets under about 4 feet of water. Tom and I talked to a local around 1:30 am on Saturday morning and asked if they needed help, as their pumps ran to get water out of their basement.

Wind calmed down around 4:30 am for about 45 minutes. Right at that same time, in the early morning hours in Mulgrave, Nova Scotia on our first ever Hurricane chase, Tom and I managed to get right into the center of the eye of Hurricane Fiona, and also during that time, the all-time Canadian record was broken for lowest pressure in a storm, at 932.6mb, which means the storm was the strongest ever to make landfall in Canada. Ever. And we were there for it!

After the eye passed, the backside of the storm at the Canso Causeway and Mulgrave wasn’t as strong. Winds from about 5:30 am onwards were about 50-80km/h, with a whole bunch of rain again coming through the area. An Environment Canada weather station on the Causeway recorded 156mm of rain from this storm.

Later in the morning on Saturday, around 7 am, considering we had to be back home in short order, we decided to leave the storm to come back home, even though it was still actually on-going. Once we started driving back west on the Trans Canada Highway and back to Antigonish, for the next 3 hours of driving, the amount of fallen trees was absolutely indescribable. The forest blowdown in that area, and much of the province of Nova Scotia (and PEI and Newfoundland for that matter), will be something that is not forgotten for many, many years. Forests will take a lifetime to recover from that storm.

We ended our chase around 7 am Saturday, as I said, and we were home in Winchester by 10 pm on Saturday. A wild weekend of weather for both of us, and 3 provinces.

Unfortunately, some places saw catastrophic damage from this storm, specifically in Port aux Basques, Newfoundland, where many homes were completely swept away and the short line was utterly decimated, and because of that, someone lost their life. No matter how fun it was for Tom and I, it wasn’t fun for others, and we knew that. May that person Rest in Peace, and may every family affected find the help they need during this difficult time.