Chef Pietro Anselmo, owner and Executive Chef at Castle View Fine Dining, hosted his second Seafood Buffet Gala in support of the Kemptville District Hospital Foundation on May 26 in memory of his daughter, Jose, who died in a car accident 26 years ago at only four years old. Pietro has been putting on gala fundraisers in memory of his daughter for many years. When he was in Ottawa, the proceeds went to CHEO; but now that he is in North Grenville, he decided to support a cause closer to home. “It is a really emotional night for him,” says restaurant manager, Michelle Traher.

The gala was a great success, with 152 tickets sold. The evening included a large seafood buffet, as well as a plate of lobster for each table. “You should have seen the amount of lobster we had delivered before the gala,” Michelle says. “The delivery guy thought it was a mistake.” There was also a silent and live auction, as well as a draw for cooking lessons from Pietro, and a white gold and diamond necklace and earring set from Sugold Jewellers. When everyone was finished eating, they were entertained by a Tom Jones impersonator, who had many people out on the dance floor.

Michelle says they are really happy with how much money they were able to raise for the KDH Foundation in just one night, surpassing their goal of $16,000. They held a similar event in the fall of 2017 which raised $12,000 for the Foundation. “We wanted to set the bar a little higher,” Michelle says.

“Chef Pietro and his staff did a fabulous job and the evening was a tremendous success, from the food to the fundraising,” said Robert Noseworthy, Chair of the Kemptville District Hospital Foundation. “We are very grateful for the support of Pietro and the patrons of Castle View Fine Dining.”

Pietro would like to continue to hold two galas a year to benefit the KDH Foundation and remember his daughter. Michelle says the next event will be sometime in the Fall. “Pietro is happy to give funds to a community that supports him so much”.

Funds raised through the event will be directed to the Foundation’s Compassionate Care Fund. The Fund is used to purchase items that do not make it on the hospital’s equipment priority list, but are much needed for the ongoing comfort and care of our patients and their families.

For example, funds from the Compassionate Care Fund were used to purchase an iPad for the long term care unit, which helps with cognitive therapy, as well as a new recliner for the patients. 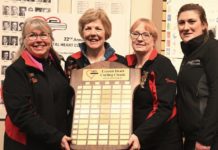