A local parent is concerned about the lack of crossing guards in Kemptville, specifically, at the busy intersections close to schools. When Kemptville Public School was located downtown, the municipality hired a crossing guard to help the kids cross Prescott Street in downtown Kemptville. When the school moved out to County Road 44 in 2017, the Upper Canada District School Board (UCDSB) deemed it unnecessary to have them at the new location, as most students would be bussed in and wouldn’t be crossing the busy street. There are also two crossings with push-button activated lights, along the walking path that leads from the school into the downtown core.

Cynthia Davidson has a daughter that goes to South Branch Elementary School, and they live in downtown Kemptville. While she believes having crossing guards close to all the schools would be beneficial, she is most concerned about the intersection of Prescott Street and Concession Road in Kemptville, which has become a lot busier over the years. “If you stand there, there is no real defined sidewalk,” she says. “It would be easy to overlook a kid standing there.” Safety at that intersection is of increased concern with the presence of two French schools at Kemptville College, and students who often walk to Moose Mart, or into the downtown at lunch and after school.

Director of Public Works for the Municipality of North Grenville, Karen Dunlop, says a study is underway to look at Concession Road and a small portion of Prescott Street in terms of pedestrian safety and vehicle traffic calming. She says the study will be presented to Council on March 12. She also points to the pedestrian crossing lights on County Road 44 and the traffic lights near St. Michael Catholic High School on County Road 43 as appropriate measures to keep kids safe while crossing the street.

Cynthia doesn’t believe this is enough. “Just because there is a light doesn’t mean there shouldn’t be [a crossing guard],” she says. Cynthia has done some research, and Brockville, Prescott and Smiths Falls all have crossing guards at the main intersections near schools. “As a parent, it shocks and concerns me that we don’t have this,” she says. “The safety of our children and vulnerable citizens should be paramount.”

Cynthia believes the cost of crossings guards is a good investment for the municipality, because it will give parents the piece of mind they need to allow their kids to walk to school. She says her father, who went to North Grenville High School in the 1950s, remembers when older students volunteered as crossing guards after school. “It would be a great way for them to get their volunteer hours,” Cynthia says.

It seems like the municipality is going to use the traffic and pedestrian control study that is currently underway as a jumping off point to creating safer roads for residents. Karen says that, while the addition of crossing guards is not currently in the budget, it is likely that the topic will come up on March 12, when the report is presented to council. 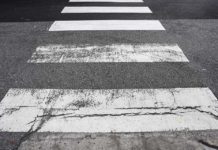